To be truly ready for autonomous vehicles, the UK first needs to be ready for electric vehicles – in particular through sufficient charging infrastructure to ensure their mass adoption. 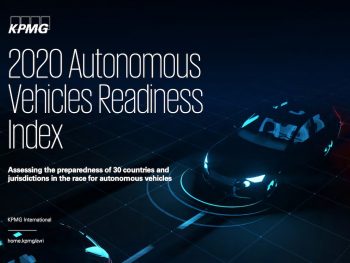 KPMG says to be truly ready for autonomous vehicles, the UK first needs to be ready for electric vehicles

So says KPMG as it warns that the UK risks losing its leadership position on developments in autonomous vehicles if infrastructure issues aren’t tackled.

Its latest Autonomous Vehicle Readiness Index (AVRI) ranks the UK in ninth position – down two places on last year – as it warns the country is in danger of falling further behind with physical and digital infrastructure developments as other countries advance.

However, as tech and innovation for autonomous vehicles advances, the report asks whether enough is being done to make sure the UK can compete on the global stage and says more focus on infrastructure investment is required; particularly as a number of countries have now advanced their game, through early activity in infrastructure generally in South Korea, and advancements in tech infrastructure specifically in the United Arab Emirates.

Sarah Owen-Vandersluis, partner and head of future mobility at KPMG UK, explained: “To be truly ready for autonomous vehicles, the UK first needs to be ready for electric vehicles, with adequate provision of EV charging infrastructure, which many local governments are already focused on. This is a critical element as the availability of EV charging infrastructure is an indicator as to how likely the market is to adopt new technologies like autonomous vehicles.

“There are also physical and commercial challenges to consider, whether it be a lack of power supply, lack of grid coverage or the need for a more viable business model, as these have historically prevented certain areas from having the necessary infrastructure. If the current road networks are to be significantly enhanced and managed in an entirely different way than ever before, a fundamental shift needs to take place and planning for that needs to start now.”

Latest research for Arval has found that fleet intentions to adopt electrified vehicles have risen rapidly in the last 12 months.

Research carried out for the 2020 Arval Mobility Observatory report in the UK found more than half (53%) of UK businesses say that they are already running battery electric vehicles or plan to do so in the next three years – up from 41% in 2019.

But a new Aviva study indicates that lack of charging, as well as the cost of going electric, is a key discouragement for drivers.

Carried out in June 2020, the poll of 2,016 UK drivers found more than half (56%) of UK drivers who don’t intend to buy an electric vehicle say the limited charging infrastructure is an factor in their decision; the same number as those citing cost considerations.

And a new report on ‘Leading the charge! Fleet charging – a catalyst for the EV revolution’ outlines how fleet operators, charge point firms and the Government all need to take action to drive the EV sector.