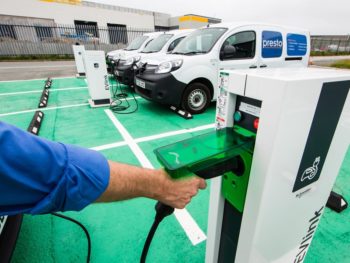 102 of the 122 new Renault Kangoo Z.E.33 are to be used for the delivery of council services, with the remaining 20 to play a major role in a new EV Trials Scheme

The majority of the vans will be used for property maintenance and civil enforcement, with 20 kept aside and made available to local businesses through a new EV Trials Scheme.

The scheme, which Leeds City Council has launched in partnership with Highways England, will see West Yorkshire businesses and organisations able to have a completely free trial of electric vans, for up to two months. Each van will be equipped with telematics to gather journey and charging data, with users receiving a tailored report highlighting the findings and the environmental and potential financial benefits that transitioning to an electric vehicle can generate for their business or organisation.

The addition of the Renault Kangoo Z.E.33 electric vans to the Council’s working fleet boosts the number of all-electric vehicles it uses across the region to over 330. Leeds City Council will charge its new vehicles via its existing charge points and is also in the process of procuring a new charging infrastructure.

The Council’s ambitions are to improve air quality and make its own operations and the city of Leeds carbon-neutral by 2030.

Councillor James Lewis, deputy leader at Leeds City Council, said: “Leeds City Council already operate more electric vehicles than any other local authority and we are a proud signatory of the Clean Van Commitment. Not only are zero emission vans better for the environment and air that our communities breathe, but they are also cheaper to run and maintain than traditional vehicles. We know that switching to electric vehicles feels like it would be a leap in the dark for some, so we’re looking forward to sharing the benefits of these vans free of charge with businesses and charities across West Yorkshire as part of our EV Trials scheme.”

More information on the Leeds City Council EV Trials Scheme can be viewed at: https://www.leeds.gov.uk/business/support-and-advice/trial-electric-vehicles-at-your-organisation