Now that Volkswagen is going crazy for electric, it seemed rude not to try one out for a while, so we will be testing a Passat Estate GTE for the next few months. 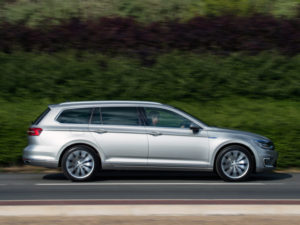 GTE, as I’m sure you already know, is the plug-in version of Volkswagen’s burgeoning new electrified range. This means it has a battery and motor which, it is claimed, can give you 31 miles of electric-only motoring, while a 150bhp 1.4 TSI petrol engine takes over after that, or acts in concert as in a traditional hybrid.

Plug-ins are not for everyone: you are essentially lugging two motors along, which doesn’t exactly help fuel economy, and while the BiK savings can seem pretty impressive to start with, if you have the wrong driver in the car, then you can start eating into those savings at a pretty smart rate of knots. Our test will be to see what sort of driving profile this car suits.

Outside of the funky powertrain stuff, this is a typical Passat Estate, which means it is massive. First impressions are that I had forgotten just how big and commodious the current generation Passat is, and how nicely furnished too. So I’m off to plug in, and drive off. I’ll report back next month.