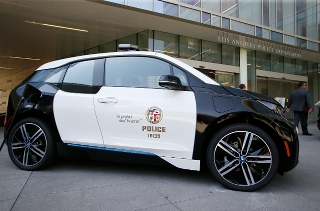 Mayor Eric Garcetti announced a commitment to lease 160 pure battery EV vehicles – said to be the largest pure EV fleet in the nation – for use by the police, fire and general services departments and the Department of Water and Power (DWP).

These will be joined by 128 plug-in hybrids leased by the DWP and General Services Department.

“Today, we take another step toward becoming the most sustainable city in America,” said Mayor Garcetti. “This year, Los Angeles will become home to the largest city-owned fleet of pure battery electric vehicles anywhere in the country, and we will save taxpayer dollars along the way.”

The plans follow the mayor’s publication last year of the Sustainable City pLAn, which commits to ensuring that 50% of the City’s annual light-duty vehicle purchases are EVs by 2017.

In addition to the 288 new battery electric and plug-in hybrid vehicles, the LAPD is also being loaned a Tesla Model S P85D and a BMW i3. These vehicles will be used for testing and research by LAPD technical experts to determine how this technology can support their future needs.  The department has also already purchased 23 electric scooters and 3 electric motorcycles for use by patrol officers.

“EVs make environmental and economic sense to the City of Los Angeles, and LADWP is pleased to support the Mayor’s goal to have EVs become the majority of our fleet,” said LADWP General Manager Marcie Edwards. “We already have 67 EVs in our motor pool, and will purchase even more to replace our older gasoline vehicles.”