Tesco, Pod Point and Volkswagen’s massive electric vehicle charge point rollout of 2,400 chargers – said to be the largest of its kind in the UK – has officially signed rapid charge point company Tritium as preferred supplier. 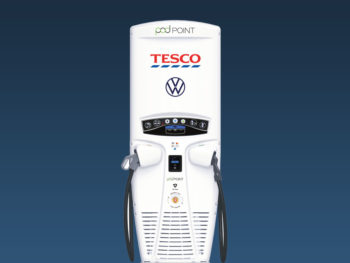 Located at 600 Tesco stores throughout the UK, and sponsored by Volkswagen, the 2,400 EV charging bays will be installed over three years. Of the 2,400, there will be a combination of both 7kW free-to-use charge points in addition to 50kW rapid chargers, as well as 22kW chargers.

The agreement is for Tritium’s Veefil-RT 50kW DC rapid charger to be used, which is said by its maker to be renowned for its compact design, ease of use and low maintenance.

Erik Fairbairn, Pod Point CEO & Founder said: “EV adoption is accelerating rapidly in the UK and we’re making sure the charging infrastructure is in place to sustain the awesome growth trend that we’re seeing.

“We decided to work with Tritium because their products are reliable, easy to install and have a small physical footprint. We also liked that it’s easy to add custom branding to the units too.

“DC fast charging is a key part of the UK charger mix, especially for drivers who need to re-charge quickly on long journeys or in emergencies, and for commercial vehicles that can’t trickle charge because they don’t park often.”

Tritium launched its Veefil-RT 50kW DC rapid charger in 2014 and since then has installed over 4,000 DC chargers.