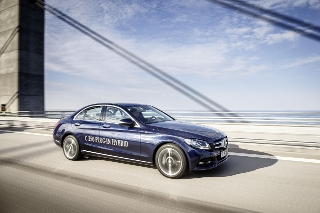 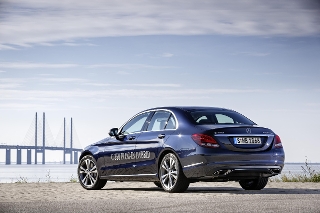 Due in showrooms from March 2015 onwards (summer 2015 for the UK), the new model marks the carmaker’s second Plug-in Hybrid model following the S500 Plug-in Hybrid as well as the first time the technology has been deployed on an estate model.

It also stands out for being the first time the German carmaker has combined a four-cylinder petrol engine and electric motor. Total output is 275bhp with torque of 443lb.ft. It also brings an electric-only range of 31km and certified consumption figures of 2.1l/100km both as a Saloon and as an Estate, with CO2 emission of 48g/km (49g/km for the Estate).

Prof Dr Thomas Weber, member of the board of management of Daimler AG and responsible for Group Research and Mercedes-Benz Cars Development, said: ‘The Plug-in Hybrid is an investment in the future of Mercedes-Benz and we believe it will become established as the successful technology for maximum efficiency coupled with powerful dynamic performance. We will be launching 10 new Plug-in Hybrid models up to 2017.’

The C350 Plug-in Hybrid also features a 6.2kWh lithium-ion battery, which is water-cooled, weighs around 100 kilograms and is mounted in a sheet steel housing underneath the rear axle in order to maximise crash safety, driving dynamics and boot space.

The battery can be recharged in around 1 hour 45 minutes at a wallbox or a public charging point, with charging via a standard domestic socket taking around two hours.

Despite the space taken up by the battery, the model has a boot capacity of 335 litres in its Saloon format with 350 in the Estate model, rising to 1,370 litres with the rear-seats folded.

Both Saloon and Estate model are also equipped as standard with Airmatic air suspension plus a Pre-Entry Climate Control system that can be controlled via the internet.