By Natalie Middleton / 4 months ago / International News / No Comments

Michelin has unveiled its e.Primacy tyre range for cars and vans; its most eco-friendly tyre yet and developed for both combustion-engined vehicles and EVs. 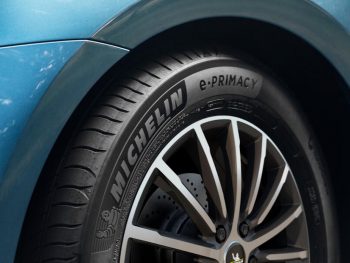 Revealed in a global virtual event, it’s the latest in the firm’s near 30-year work on ‘green’ tyres and is said to deliver the lowest emissions in its class, while being affordable to use and guaranteeing the usual Michelin levels of safety, grip and durability performance benefits. It’s also suitable for electric and hybrid vehicles.

A core benefit is that the e.Primacy tyre has been developed to be CO2-neutral at the time of purchase, from the extraction of raw materials to transport to the customer; billed as a world-first. This is due in part to its energy efficiency in use; it’s rated A in energy efficiency and also B in wet grip, due to its rolling resistance; Michelin says fewer than 1% of tyres deliver a winning combination of A-rated rolling resistance and A or B-rated wet grip.

But it’s also CO2-neutral due to Michelin’s offsetting work, which includes projects to replant trees.

As well as being designed for internal combustion engine vehicles, the e.Primacy is suitable for hybrid and fully electric vehicles. Michelin says its rolling resistance performance improves an EV’s energy efficiency, thereby increasing its range by an estimated 7% or around 30km (19 miles) for a vehicle with a range of 400km (249 miles) compared to other tyres in the same category.

Michelin’s work to reduce its environmental footprint more quickly has also seen it pledge to lower CO2 emissions from all its production facilities by 50% by 2030 compared with 2010, with the ultimate goal of achieving carbon neutrality by 2050.

Its work on tyre efficiency is also targeted to ensure its tyres will be 20% more energy efficient by 2030 than they were in 2010.

Previous: Toyota Prius Plug-in gets new safety and connectivity kit
Next: Comment: How the UK Government is driving the electric revolution