Mitie has deployed its 750th electric vehicle – beating its target of having 20% of its light vehicle fleet switched to electric some three months early. 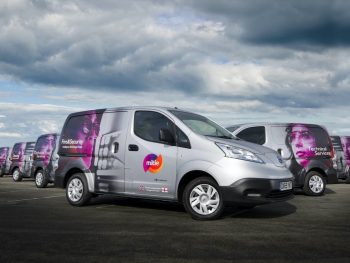 Mitie already has some 750 EVs on its light vehicle fleet

The facilities management and professional services company has a Plan Zero commitment to produce net zero carbon emissions by 2025 – and a key part of this is its pledge to switch its entire fleet of around 5,500 cars and vans to zero-emission vehicles by 2025.

Its interim target was to transition 20% of the fleet, or some 717 vehicles, over by the end of this year, but it’s already well ahead of schedule. The 717th EV, a Kia e-Niro, was delivered to the Mobile Engineering team three months ahead of the 2020 deadline and just 15 months after Mitie’s first-ever EV joined the fleet.

It’s now got 750 EVs on its fleet and the total is fast-rising; on average, Mitie is now adding 75 new electric cars and vans to its fleet every month.

Mitie is also pushing ahead with work on charging infrastructure for drivers. Where possible, all its drivers have had a charge point installed at their home and chargers are now in place at Mitie’s key office locations and some customer sites too. In total, Mitie has installed over 600 chargers throughout the UK.

But it warns that charging remains a significant barrier – a recent survey of Mitie’s EV drivers found that it is one of the biggest difficulties they face when switching – and has called on the national and local government to play their parts and drive the charging infrastructure, especially for communal and on-street parking.

Mitie is also supporting fleets looking to go electric by sharing its experiences and knowledge through its Plan Zero Fleet Transition Service. This provides an end-to-end solution, covering  every stage of the move to EVs, from vehicle choice and charging infrastructure, through to employee travel policies.

Simon King, director of sustainability and social value, Mitie, said: “With our first electric vehicle joining our fleet just 15 months ago, I’m incredibly proud that we’ve delivered on our ambitious commitment to switch 20% of our cars and small vans to EV, three months ahead of schedule. But this is just the first leg of our journey. We’re committed to going further and faster, having pledged to have a zero-emission fleet by 2025.

“With such a rapid electric vehicle rollout, we’ve overcome numerous challenges by creating and implementing new solutions along the way. Through our Plan Zero fleet transition service, we’re taking our commitment to sustainability one step further by sharing our experiences and expertise with others.”