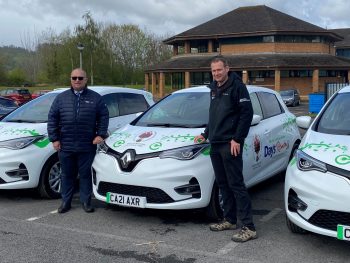 The park is already a leading advocate for electric vehicles – as an early adopter, it added its first EVs to its pool fleet in 2016 and, effective from April 2021, it has removed all non-plug in vehicles.

It also deployed its deployed its electric van in 2020, and fleet manager Kevin Booker – winner of the Eco Superstar title at the 2021 Fleet World Great British Fleet Awards – has further plans for both vehicles and infrastructure.

Now, the National Park Authority has taken delivery of three new electric cars for Meet and Greet staff. The staff are being deployed across the Brecon Beacons to provide visitor management at hot spots on weekends, supported by temporary pool cars which, in keeping with the Authority’s green ethos, are also electric.

Deployed with the help of the Welsh Government through the Hardship Fund, the newly supplied Renault Zoes have a range of over 200 miles, so are perfect for the Meet and Greet staff to move around their patches of the National Park, which covers 520 square miles and is Wales’s second-largest national park.

Kevin Booker said the new vehicles, alongside the Authority’s existing fleet, further underline that electric vehicles should not just be restricted to urban fleets.

He commented: “This opportunity continues the Authority’s commitment to deploying zero-emission vehicles for use throughout the park and shows that electric vehicles are suitable for use in a rural setting, not just in cities.”

The vehicles were specially ordered in for the park from Day’s Rental, which has been exploring electric vehicles since 2018, but is fast-expanding its stock to include electric vans and smaller city cars.

Andy Cooke, account manager, said: “At Days Rental we always embrace technology that will benefit all. Our increasing range of electric vehicles offers our customers the opportunity to try and experience the technology first-hand, giving everyone first sight of the future that is now here. Increasing numbers of vehicle manufacturers are now developing and producing ‘pure 100% electric vehicles’, giving a wider choice and one that also suits all budgets.”

Previous: Electric cars and vans to be cheaper than petrol vehicles in all segments by 2027
Next: Clear inflection point in driver attitudes to EVs and digital retailing