Lexus has announced pricing for its new LC Coupe range, which will see both the V8-powered LC 500 and the full hybrid LC 500h start from £76,595. 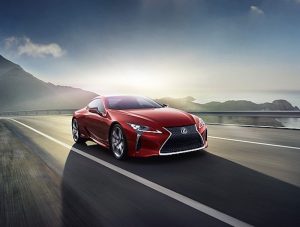 Premiered at last year’s Geneva Motor Show, the LC is based on the LF-LC concept revealed in 2012 and retains a lot of the styling elements.

In the LC 500h, it also offers a 354bhp full hybrid system with V6 engine and the new Lexus Multi Stage Hybrid System. No performance and economy figures have yet been announced.

First deliveries are planned for the end of July.

Lexus has also announced that its LS 500h full hybrid flagship saloon will make its world debut at the Geneva Motor Show.

For more of the latest industry news, please click here.