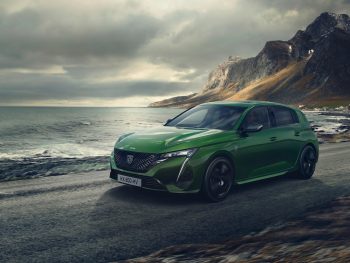 Launching later this year, the 308 will be the first Peugeot to use the brand’s new logo and features bolder new styling. It also sits on the latest, longer version of the Efficient Modular Platform (EMP2) platform, with the 55mm longer wheelbase giving more room for rear seat passengers while overall length is up by 11mm. Boot space stands at 412 litres, boosted by a further 28 litres of storage in a hidden compartment, and rising to 1,323 litres with the rear seats folded.

Two plug-in hybrid powertrains will be on offer alongside petrol and diesel engines, marking a first for the model; Peugeot’s plan is to offer an electrified variant across its entire model line-up by 2025.

The PHEVs comprise the Hybrid 225 e-EAT8 and the Hybrid 180 e-EAT 8. These feature a 180hp and 150hp PureTech petrol engine respectively, along with a 110hp electric motor married up to an e-EAT8 auto gearbox. Both versions are powered by a 12.4kWh lithium-ion battery, giving CO2 emissions of between 25-26gkm and electric-only ranges of 36-37 miles.

There are two types of on-board chargers available – a standard 3.7kW charger and an optional 7.4kW fast charger, the latter enabling a recharge time of around one hour 55 minutes.

The engine line-up also includes a 1.2-litre PureTech 130 petrol and a 1.5-litre BlueHDi 130 diesel, both with the EAT8 eight-speed automatic. Emissions start from 117g/km.

The 308 will also use the latest version of the Peugeot i-Cockpit digital-focused interior concept with 3D technology, as well as the i-Connect Advanced infotainment system which includes profiles for up to eight different drivers, wireless screen mirroring and the ability to connect two phones using Bluetooth simultaneously.

The interior has also been revamped with a new high-quality finish and gets a 10-inch digital instrument cluster, including a 3D display on GT models.

Latest-generation driving aids also debut, including a Drive Assist pack, which includes adaptive cruise control with Stop and Go function (when fitted with the EAT8 automatic gearbox) and lane keeping assistance, as well as three new features aimed at dual carriageways and motorways.

Prices and further specification details will be announced closer to the launch date.

Previous: J Murphy & Sons partners with Alphabet to drive EV and PHEV adoption
Next: Plug-in Grant reductions: The reaction from the fleet and automotive sectors