Peugeot is expanding the line-up for its third-generation 308 with the addition of the SW estate model. 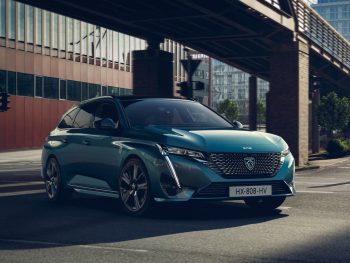 The new 308 SW gets its first-ever plug-in hybrid models as well as Peugeot’s new logo and design language, plus latest driving tech

Arriving in showrooms early 2022, the 308 SW joins the family hatchback revealed earlier this year and, like its sibling, gets its first-ever plug-in hybrid models as well as Peugeot’s new logo and design language, plus latest driving tech.

As with the hatch, it’s based on the latest, longer version of the Efficient Modular Platform (EMP2) platform, making it longer and lower than the previous generation and with a 55mm longer wheelbase while the rear overhang is 21cm longer.

This improves boot space, which rises to 608 litres, extending to 1,634 litres with the rear seats folded. The new 308 SW also comes with a two-position boot floor and a 40/20/40 split configuration for the rear seats as standard. Top-spec models come as standard with an automatic tailgate.

The new 308 SW also introduces two plug-in hybrid powertrain options from launch, marking a first for the range. Also launching in the hatch, the PHEVs comprise the Hybrid 225 e-EAT8 and the Hybrid 180 e-EAT 8. These feature a 180hp and 150hp PureTech petrol engine respectively, along with a 110hp electric motor married up to an e-EAT8 auto gearbox. Both versions are powered by a 12.4kWh lithium-ion battery, giving CO2 emissions from 26g/km and electric-only ranges of 36-37 miles, putting them in the 11% Benefit-in-Kind bracket for 2021/22.

A 3.7kW charger comes as standard and can recharge the models in just under four hours, while the optional 7.4kW fast charger reduces this to just under two hours.

The engine line-up also includes the 1.2-litre PureTech 130 petrol and a 1.5-litre BlueHDi 130 diesel from the hatchback, both with the EAT8 eight-speed automatic. Emissions start from 117g/km.

A significant revamp of the interior sees the 308 SW get the latest version of the Peugeot i-Cockpit digital-focused interior concept, as well as the i-Connect Advanced infotainment system which includes a 10-inch HD digital display and, on higher-spec models, a 3D display and comes with TomTom Connected 3D Navigation. It also introduces new i-Toggle switches to provide shortcut keys to functions. Apple CarPlay and Android Auto screen mirroring are standard, with wireless connection and voice commands on some trims.

The new 308 SW is also available with the latest semi-autonomous driver assist features and safety technologies, including semi-automatic lane change, anticipated speed recommendation and curve speed adaptation, which tailors speed to the severity of the bend.

The new 308 SW will open for orders later this year.