By Jonathan Musk / 3 years ago / New Cars, Tech / No Comments

Toyota has announced a variety of new engine and transmission technology, the core of which will see its next-generation hybrids offering all-wheel drive. 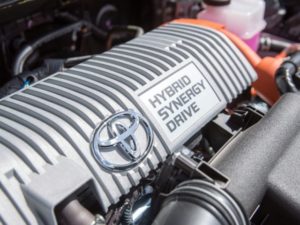 Toyota says it hopes to install TNGA powertrains in up to 80% of Toyota/Lexus vehicles by 2030, accounting for a reduction in CO2 of 18%

The in-line four cylinder petrol engine and hybrid electric assisted versions are said to offer more torque than existing models, as well as thermal efficiency of 40% and 41% respectively – making them more economical and offering more torque.

An E-Four all-wheel drive system is described as offering up to 30% more torque at the rear wheels, as they are electrically driven and will be fitted to Toyota’s hybrid models.

Toyota intends to expand the number of models equipped with the new powertrain units from spring 2018 onwards.

Toyota forecasts that 80% of Toyota/Lexus vehicles will be equipped with these units, which alone will reduce CO2 emissions from Toyota vehicles by more than 18%.