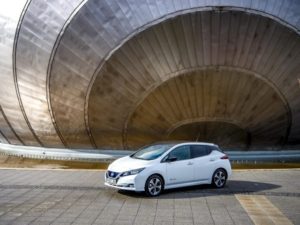 Nissan is making technology from the Leaf available in other models.

Globally, the carmaker said it wants to sell a million electrified vehicles annually by the 2022 financial year. The expectation is that Europe and Japan will be the most advanced markets for this, reaching 50% of its volume by 2025, compared to 30% in the United States and 40% in China.

Demand will be met by rolling out eight new fully-electric vehicles, including a ‘kei’ car for Japan, four vehicles under the China-only Venucia brand, and a crossover previewed by the IMx concept.

Nissan said it will also broaden the availability of the e-Power drivetrains, which use an electric motor to drive the wheels, but with power supplied by a battery charged by a small petrol engine. Two thirds of Japanese Note volume features e-Power technology.

From 2021, all new Infinitis will be available with either fully electric or e-Power drivetrains too, with a target of 50% of its global volume being electrified by 2025.