By Natalie Middleton / 1 day ago / UK News / No Comments 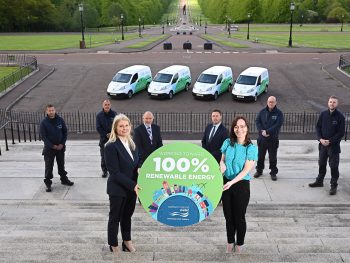 The government-owned water company is the sole provider of water and sewerage services across the province and the new vans form part of its work to become carbon-neutral.

The e-NV200 vans feature the same 40kWh battery as the Nissan Leaf, giving them an official range of 124 miles, said to rise to 187 miles in city conditions. They also have a maximum cargo capacity of more than four cubic metres.

Nichola Mallon, infrastructure minister at the Northern Ireland Assembly, said: “NI Water has an ambitious strategy to address the climate emergency and become carbon-neutral by 2050.

‘‘As the biggest user of electricity and the second largest landowner, they have a unique opportunity to do this by harnessing their assets for a wide range of environmental initiatives.

“The arrival of these vehicles is a major step forward, demonstrating NI Water’s commitment to nature and their ambition to reduce their operational impact to enhance and protect the natural environment.”

Karen Reid, corporate manager for fleet sales at Nissan, added: ‘‘We are really proud to work with Northern Ireland Water and support their efforts to decarbonise.

‘‘We applaud proactive organisations who are leading in this space and are very thankful to NI Water for choosing our brand.”