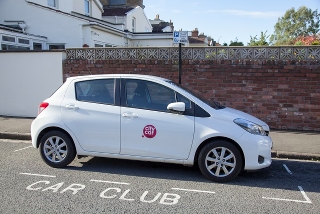 City Car Club has operated car sharing on behalf of Nottingham City Council since May 2014. In November 2014 the Council was awarded £37.5k by the Department for Transport via CarPlus to help further develop Nottingham's integrated transport network, expanding the City Car Club fleet from eight locations and nine vehicles to 11 locations and 12 vehicles.

The move will see three new neighbourhood hubs introduced at key transport interchanges to offer access to a pool of shared cars, local public transport and Citycard Cycle hire. The Citycard, the Council's integrated smart ticket, currently offers train, tram, bus and bike travel. It can now also be upgraded to access City Car Club vehicles in addition to the usual scheme membership card. This means Citycard users can get off the bus or tram and straight into a City Car Club hire car.

Dan Gursel, general manager for City Car Club, now part of Enterprise Rent-A-Car, said: “Integrated schemes such as Nottingham show that car clubs are taking off by providing a real alternative for everyday travel. From our data we can see that local businesses and residents are already regular users of car sharing here and equally visitors to the city who are members in other locations are also accessing the vehicles.