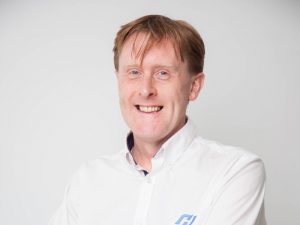 What is Hyperdrive Innovation?

We started just over five and a half years ago as Hyperdrive, and incorporated four and a bit years ago when we got venture capital investment and a grant from Innovate UK.

Most of what we do is around the battery system and the electronics within the battery, but also in supporting our customers in doing integration work.

Who are your customers?

The technology started in mainstream automotive and it’s evolving quickly. Now it’s evolving into other niches such as off-highway and municipal vehicles, such as street sweepers, which have historically been old-fashioned diesel technology; quite dirty, noisy and potentially inefficient. Electrifying that is a good opportunity, because it’s much quieter, so you can get past restrictions on noise, but you can also use them inside such as a shopping centre, a factory building or whatever.

Then we’re working on aircraft manipulation vehicles, pushback tractors for airports. There’s a big push to reduce fuel consumption and emissions in air travel, but all the vehicles on the air side tend to be quite large diesels. They’re very well suited to hybridisation as you don’t need all the power all the time; they’re often either sat at idle or at peak power when getting the aircraft going.

We see lots of scope where there might be a number of niche type vehicles – a few hundred here and there – but if you have a fairly standard battery system in them you can have common components. You can scale up quite quickly that way.

What do you get from Nissan?

Only the cells – we’re not chemists. We’re able to source battery cells from anywhere, and historically we’ve bought a lot of cells from overseas. We need the very best, what we do is high quality, high-performance battery systems and that involved those batteries coming a long way, from East Asia. So a long supply chain, long lead times and exposure to currency variations.

We now source from less than a mile away and we buy in pounds. It’s a huge benefit. Nissan is extremely capable at producing the battery module but wants to focus on the LEAF and e-NV200. We can bridge the gap between their core focus and other applications. So it’s our battery management system, and our engineers do the integration.

How are you improving the performance of the batteries?

It depends on the way the battery is used. We work with our customers to understand the duty cycles, and how the vehicle or system will be used. A factory robot has a very different cycle to a car because it’s autonomous, so it runs all the time. We have a menu, a whole background of technology that we can draw from to come up with a system that works best for the application.

How do you see the EV market progressing?

I think legislation will change. We’re only just starting to see the effect of legislation on diesels, people are moving to ban combustion engines in city centres, and there are certain vehicle sectors where if you don’t have an EV or hybrid you can’t sell vehicles. It’s progressing quickly.

It’s not a magic technology, and it can’t solve every problem – if you’re thinking about heavy trucks then they’re fairly efficient if they’re full, so it’s difficult to improve on that. It’s really horses for courses, and we’ll only suggest our technology if there’s a customer advantage. Our customers have to succeed if we want to succeed.