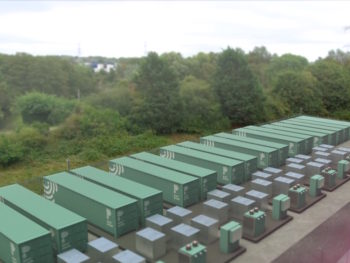 The Energy Superhub Oxford project will see a hybrid battery, said to be the largest ever deployed, to power a 10km network of charging stations to kickstart an “EV revolution”

The 50kW rapid electric charger has been installed at the Cowley depot for ODS, the city council’s wholly-owned company and a provider of vital services including waste collection.

The innogy eMobility rapid charger forms part of the Energy Superhub Oxford (ESO) project, led by Oxford City Council and Pivot Power and marking one of four demonstrator projects in the UK. Intended to provide a blueprint for other cities and countries, the scheme will use a commercial hybrid energy storage system, said to be the world’s largest, to power a 10km network of charging stations.

The project, supported by a £41m grant by Innovate UK, has also seen the installation of 32 fast 22kW chargers, which will be trialled by ODS alongside new EVs; the company is adding 34 new electric vehicles this year and aims to electrify 25% of its 330 fleet by 2023.

But it’s the rapid charging point that’s most significant as it will enable the first electric heavy goods vehicle to start work in the city, saving 27 tonnes of CO2 emissions every year. This will rise to a saving of 750 tonnes of CO2 a year once all 27 refuse carts are electric.

The use of RFID cards or App authentication means only authorised drivers will be able to charge their vehicles, ensuring the fleet remains operational at all times. ODS will retain control of its charging infrastructure and the data created by its users, and will be able to record results against climate change objectives.

The chargers also use smart technology to dynamically manage the load between priority and routine vehicles as well as the available energy on site.

In the longer term, the chargers will connect directly to ESO’s EV charging network which will be optimised alongside the new super battery, providing significant amounts of power for rapid EV charging at key locations around the city, including the public superhub at Redbridge Park & Ride.

Councillor Tom Hayes, deputy leader and cabinet member for Green Transport and Zero Carbon Oxford , Oxford City Council said: “Every vehicle powered by electricity helps to reduce the council’s emissions and address our climate breakdown and air pollution problem. The chargers’ smart technology will also help to achieve smarter ways of working which should benefit the council as a whole.”