London-headquartered charging firm Pod Point is ramping up its commercial charging services in Norway, including a new agreement with Peppes Pizza. 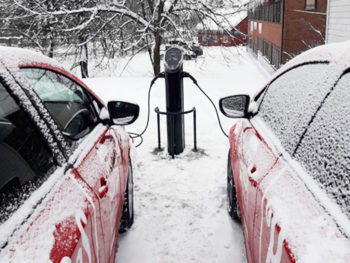 The pizza chain, believed to be the largest in Scandinavia, is in the process of switching its 120-strong fleet to electric vehicles and is deploying Pod Point chargepoints for all company-owned delivery branches in Norway.

Installation of the chargepoints, which will be used by Peppes staff and delivery vehicles, has already commenced at the pizza chain’s Lambertseter and Løren sites and the rest will be rolled out over the next three years.

The EV charging provider will provide Peppes Pizza with a fully managed service, including initial consultation and site surveys through to installation and maintenance. Meanwhile, its back-end Smart Reporting platform will enable Peppes Pizza to monitor its carbon dioxide savings against its sustainability targets. Pod Point will also be the recommended supplier for Peppes Pizza’s 42 franchisees.

Ingrid Opsal of Peppes Pizza, said: “Now EVs have the range required to meet the needs of our drivers, it’s time to make the switch. It’s fair to say the whole team is very excited about this – sustainability is a big focus for Peppes Pizza and we see this as huge progress towards our goals. As this is such as large-scale installation, it’s reassuring to work with a full service provider like Pod Point, which can take care of everything and minimise the workload for our team.”

Although Pod Point is an established homecharge provider in Norway, the deal marks part of its plans to diversify into commercial charging to more closely mirror its business in the UK, where it provides a fully managed service to a wide range of businesses and organisations. Its expansion is being supported by Norwegian language versions of its website and app, which are scheduled to be launched next year.

Erik Fairbairn, CEO and Founder of Pod Point, said: “Norway is well and truly ahead of the curve when it comes to EVs and helping Peppes Pizza to electrify its entire fleet is a significant milestone, which we look forward to UK businesses replicating in the near future. We’ve learned a lot from Norway’s approach to EVs and we’re delighted to see demand for a fully managed service.”