Hyundai has revealed details for its Tucson Plug-in Hybrid, which is priced from £39,330 and scores a 10% Benefit-in-Kind rating. 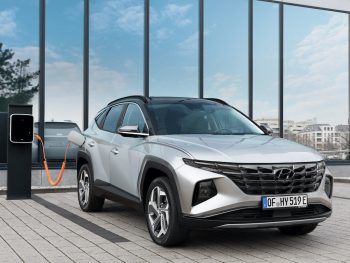 Particularly expected to appeal to fleets, the PHEV variant joins the full hybrid and mild hybrid engines launched in the initial line-up for the fourth-generation Tucson; the brand has said its midsize SUV will have the widest range of electrified powertrains in its class.

On sale from 22 March, the Tucson Plug-in Hybrid uses the same 1.6-litre T-GDi Smartstream engine as the conventional and mild hybrid powertrains but paired up with a 91hp electric motor, giving a combined 265hp maximum power and 350Nm maximum torque. The motor is powered by a 13.8kWh lithium polymer battery with an onboard 7.2kW charger and an electric-only range of up 31 miles. Official fuel economy and CO2 emissions are yet to be confirmed, but Hyundai says it’s in the 10% BiK bracket for the current tax year, rising to 11% for 2021/22.

It comes as standard with a six-speed auto transmission and four-wheel drive including a Terrain Mode selector.

Alongside its zero-emissions capability and low BiK, the Tucson is also expected to appeal to fleets due to high standard specification.

As with the conventional hybrid, the plug-in hybrid Tucson is available with two of the three trims from the wider range. The entry-level Premium includes 18-inch alloy wheels, LED front and rear lights, 10.25-inch touchscreen satellite navigation with Bluelink connected car services and a 10.25-inch driver’s instrument cluster.

Previous: 2035 zero-emission plan is ‘technology-neutral’ but not ‘outcome-neutral’
Next: Loss of EV charge in cold conditions will require extra fleet planning