Renault is ramping up its focus on electric vehicles, mobility services and connected solutions as it looks to transform the brand under new five-year strategic plans. 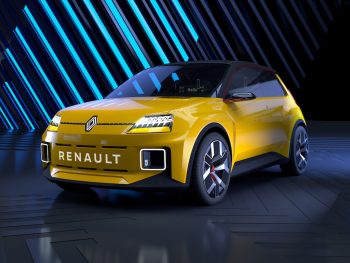 The strategy – which also includes wider plans across Groupe Renault – will look to create a profit-driven, not volume-driven, organisation underpinned by three parallel strategies that will turn Renault into a tech, service and clean energy brand.

The ‘clean energy’ focus on electric vehicles will see it launch 14 core vehicles by 2025, of which seven will be fully electric. All new models will have an electric or hybrid version. New products will be grouped into families based on its two dedicated electric platforms: CMF-EV and CMF-B EV.

The new fully electric models will include a new version of the iconic Renault 5, already revealed as a prototype and which will be reborn as an electric city car intended to “democratise” the electric car in Europe and featuring a retro styling already proving popular for the Honda e and Fiat 500.

But Renault will also become a ‘challenger’ in the hybrid market with a 35% hybrid mix – building on existing bold plans for its e-Tech hybrid and plug-in hybrid solutions.

The brand will also offer market-ready, end-to-end hydrogen solutions for LCVs – it announced earlier this week that it’s teaming up with Plug Power on fuel cell LCVs.

Its overarching target is to reach the greenest mix in European market.

The model plans also place dominance on the C- and D-segments; seven of the 14 core vehicles will be in these sectors. Renault says its ambition is to recapture its leadership in the C-segment while continuing to remain a leader in the B-segment.

The other two pillars of its new strategic plans are to become a ‘Tech’ brand and a ‘Service’ brand.

The Tech plans will see Renault leverage the ‘Software République’, an open ecosystem dedicated to software, data, cybersecurity and microelectronics. This will fuel the Renault line-up with connected services and will also allow Renault to equip its vehicles with leading artificial intelligence and cyber-security systems.

Its Service plans look to offer the best connectivity and high-tech services embedded natively in its vehicles. In 2022, Renault will be introducing My Link, a new infotainment system with Google Built-in, and it says it will be the first carmaker to bring Google services to mass-market cars.

There are also wider ‘Renaulution’ Groupe Renault plans for a new Mobilize business, enabling the group to “jump faster into the new world of mobility, providing solutions and services to the other brands and external partners”. Groupe Renault says its strategy is to make at least 20% of its revenues from services, data and energy trading by 2030.

The full group plans also look to keep the Dacia and Lada brands (where offered) focused on ‘coolness’ and affordable products respectively, while the Alpine sportscar brand will develop a 100% electric product plan to support expansion.