By Alex Grant / 5 years ago / New Cars, Road Tests / No Comments
Such is the familiarity and outward normality of the Auris Hybrid that, now in its sixth year on sale in the UK, it’s easy to overlook the role it’s played in exposing people to the technology underneath. 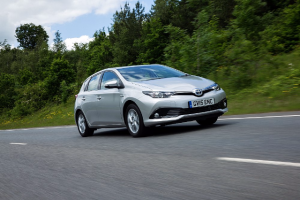 Plug-ins from Mitsubishi and Nissan, and Toyota’s own Prius, have stolen the limelight as figureheads, but the volumes are significant here. Over half of UK Auris customers choose the hybrid and, at 10,772 registrations last year, it’s a quarter of non-plug-in hybrids volume. This is the UK’s third biggest-selling alternative fuel vehicle, just behind the Yaris Hybrid, and only 1,000 units adrift of the surging Outlander PHEV. Quietly, this is a very important car.

It’s also a rational purchase, largely driven by the appeal of low running costs, comfort and environmental consciousness rather than chic styling or class-leading dynamics. That’s something Toyota is clearly aware of, pitching last year’s refresh at better benchmarking European brands for driver enjoyment, comfort and cabin aesthetics. Qualities which can, in turn, be exported to other markets.

The drivetrain itself is unchanged. It’s essentially the same system fitted to the Prius and the Lexus CT 200h, comprising a 1.8-litre petrol engine and continuously variable transmission with an electric motor between them. This produces a very appealing 134bhp with the convenience of clutchless inner-city driving, and Benefit in Kind unmarred by the 3% diesel BiK levy. As a company car, it has plenty going for it on paper.

In reality, it’s quite a different experience to similarly-powerful 2.0-litre diesels. The Auris is best suited to gentle-footed inner-city driving, where it’s quiet and regularly glides along on electric power, using energy recuperated through the electric motor rather than a plug. Toyota has done a good job of muting the high-revving drone when it’s under heavy load, but it’s a characteristic to get used to. Take it steady and it’s a very quiet, relaxing way to get around.

Visual updates are most noticeable in the chrome-lined headlamps and tinted rear lights, but it’s the much subtler improvements to the interior which really mark this apart from older models. Toyota has paid attention to consistency of lighting and materials and, though the overall shape of the dashboard and the position of most of the buttons has hardly changed, it’s a much neater design with the central navigation screen integrated into a gloss panel. It may not have the design flair of an Audi, but some premium hatchbacks can’t match Toyota’s fit, finish and material quality.

On the downside, the hybrid doesn’t have the same colour-matched blue illumination as the rest of the range. The main instrument cluster is white, which does feel a little disjointed compared to other models. But it displays information intuitively, the power metre needle turning orange when it’s working hard, making it easy to monitor from peripheral vision and in turn making it easy to adjust driving style.

Of course, the rational benefits are still there. It’s exceptionally comfortable on small wheels, Toyota’s Safety Sense assistance technologies are a £450 upgrade and the Business Edition has everything a fleet driver could need. There’s no effect on BiK for those up to higher trim levels and larger wheels, and the drivetrain is very efficient when it’s not being driven oafishly. A diesel will offer better motorway economy, though.

If anything really stands out, it’s that this feels so normal to use. There’s no need to plug in, no nagging concerns about lugging a flat battery around on long trips as you would in PHEV, and Toyota was ahead of the curve in dismissing diesel in urban use. The Auris might have sidestepped the limelight, but the improvements make this very important hybrid even easier to move into.

Exceptionally comfortable and really well built, the Auris’s refinement and interior quality could rival some premium models. There’s an adjustment in driving style to be made to get the most out of it, but this is clever technology made normal and an important car too.