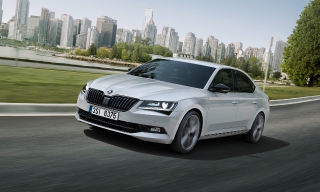 Although details are limited, it’s likely that the Superb will feature a version of the drivetrain used in the VisionS concept car shown at Geneva last week, itself a development of the technology used in Volkswagen’s GTE models and the A3 e-tron – all of these use the same platform as Skoda’s flagship model.

This combines a 1.4-litre, 154bhp petrol engine with a 40kW electric motor, through a six-speed DSG transmission. However, it’s unlikely that the Superb will feature the electric rear axle used in the VisionS.

The Superb will be one of 20 new Volkswagen Group plug-ins launched by the end of the decade, as confirmed with a change of R&D focus at the end of 2015.

Among these will be the first fully electric Audi and Porsche models and a Phaeton EV, which will offer over a range of over 300 miles and rapid charging ability. The group will also launch a line-up of new models based on the new ‘electric toolkit’ – a standardised set of drivetrain parts enabling plug-in hybrids to travel further, and a high-volume EV with a range of 180 miles.