Škoda has unveiled its Vision iV concept at Geneva, providing a clear preview of the brand’s forthcoming electric crossover. 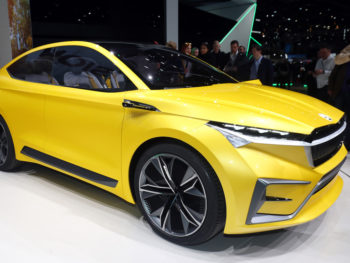 Making its debut alongside the new Kamiq crossover, the concept is the forerunner to the brand’s first production car to be built on the VW Group’s MEB modular electric car platform – also used for the Volkswagen ID electric hatchback due next year and Seat’s El-Born concept that’s also debuted at Geneva.

Power comes from two electric motors, one on each axle to give all-wheel drive, with a total 306hp output. The 83-kWh liquid-cooled lithium-ion battery, positioned between the front and rear axle, offers a range of up to 500km (311 miles) in the WLTP cycle and can be charged to 80% in 30 minutes.

Avant-garde features on the concept include the use of cameras to replace the wing mirrors giving a 180-degree view, and handle-less doors. It also features full smartphone connectivity to unlock and start the car and offers Level 3 autonomous driving and parking, including even monitoring the driver’s heart rate and braking if need be.

The interior gets a floating infotainment touchscreen, a panoramic glass roof, a two-spoke steering wheel and a soft-foam surface that will be used in all Škoda cars in future. It also features eco-friendly materials while the seats are covered in a suede substitute that does not contain any animal-derived components and is partially recycled.

In line with the e-mobility theme, Geneva also saw Skoda unveil an electric bike concept. Dubbed Klement and fitting in the brand’s history of bicycle manufacture under its founding fathers Laurin & Klement, the bike uses a 4-kW rear hub motor to give a top speed of 45kph (28mph) along with hydraulic brake at the front equipped with ABS and LED lights.