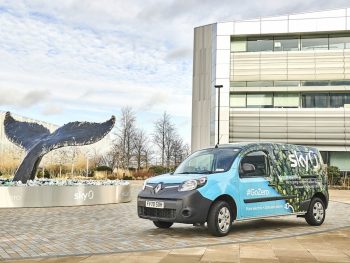 The consumer media and entertainment company is planning to be net zero carbon by 2030 and the new vans – which replace previous diesel vehicles – will help drive forward its ambitions. Around 34% of the company’s carbon emissions originate in its supply chain and the new Renault Kangoo Z.E.s will provide invaluable insight on how pure-electric commercials can be rolled out to areas of its 4,000-strong fleet to significantly lower this.

Sky will use the Renault Kangoo Z.E. vans as facilities vehicles, primarily West London-based and working out of Sky’s Isleworth UK headquarters to support its local sites, but with additional journeys further afield to the company’s Chilworth technology centre within the University of Southampton Science Park. Several will also be deployed at Sky’s Scotland sites in Livingston, Dunfermline and Uddingston.

The Kangoo Z.E. was chosen for its range – which stands at 134 miles WLTP – as well as its size and positive driver feedback from earlier trials.

Sky is also in the process of installing extra charging points throughout its locations, with its Osterley facility now having 95 chargers. On-site charging points will use renewable energy.

Oliver Wanklyn, senior fleet operations manager, supply chain operations at Sky, said: “These Renault Kangoo Z.E. vans take us another step closer towards our commitment to be net zero carbon by 2030. We’re very excited to introduce them and see them out on the road. With the unique livery that details their 100% electric power they’ll be highly visible to the public, helping us to drive awareness of Sky Zero and importantly, inspiring others to #GoZero with Sky.”