By Jonathan Musk / 4 weeks ago / International News / No Comments

Stellantis – the company formed from the merger of PSA and FCA – will begin production of a hydrogen fuel-cell powered van by the end of the year. 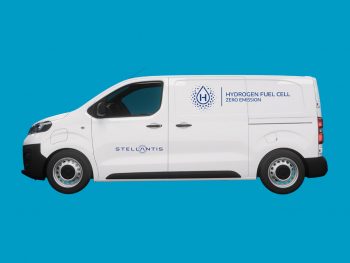 The vehicle will be based on the Peugeot e-Expert/Citroën ë-Dispatch/Vauxhall Vivaro-e L2 and L3 variants and produced only in left-hand-drive. The company says that its aims in producing the vehicle are to produce a vehicle with zero emissions, long driving range and rapid re-fuelling – within three minutes. The technology is designed to be complementary to battery electric vehicles. Target driving range is over 400km (250 miles).

Like the current battery electric models, the load area of the fuel-cell variant will be unaffected. Three hydrogen storage tanks will replace the under-floor battery packs, providing for a payload of up to 1,100kg. The vehicle will be designed with a hybrid drivetrain, modified from the current Peugeot/ Citroën/DS petrol/electric hybrid drivetrains, with a battery pack mounted under the passenger seat that can provide a range of 50km and store regenerated energy from braking and slowing.

This battery can provide additional power for acceleration, during start-up and in the first mile of operation. Faurecia will develop, supply and assemble the hydrogen storage systems while Symbio is the partner chosen to develop the fuel-cell system. Vehicles will be assembled at the Opel Special Vehicles plant in Russelsheim, Germany, when Stellantis has located its global Centre of Competence, Hydrogen and Fuel Cells.

Stellantis says that only four challenges remain: Full scale production of “green” hydrogen at an economically viable cost, the development of nationwide networks of hydrogen filling stations, integration of the fuel cell system into the vehicle platform and cost reduction.

Previous: Comment: How public and private sector collaboration will pave the road to 2030
Next: Free electricity for EV drivers