Tesla’s ‘Supercharger’ network to double in size this year

Tesla is to double its global network of ultra-fast charging points during 2017, as it prepares for the launch of the compact-executive Model 3 electric car and growth of its current models. 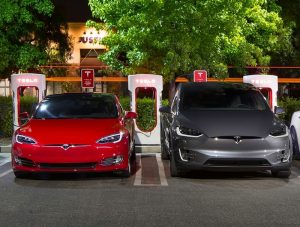 The carmaker said it began 2017 with 5,000 Superchargers – which offer fast, high-power charges mostly along major routes, and are designed for long-distance driving. It now has 5,400.

By the end of the year it aims to have 10,000 in place, a fifth of the new units will be installed in California, and introduce large sites for “several dozen” vehicles to charge simultaneously.

There are 15 sites listed listed in the UK as being earmarked for new Superchargers this year, according to the Tesla website.

The expansion is aimed at avoiding the need to wait for a charging point and growing its presence in cities. Installation will begin before the summer.

“It is extremely important to us and our mission that charging is convenient, abundant, and reliable for all owners, current and future,” Tesla said in its statement.