Octopus Electric Vehicles may not yet be a household name, but it’s one that may prove key in the transition to electric vehicles for fleets. Jonathan Musk catches up with CEO Fiona Howarth. 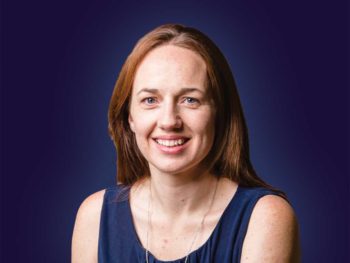 Attracting 30,000 new customers a month, Octopus Energy is fast becoming a major player in electricity provision, providing its 450,000+ customers with an enticing blend of planet-friendly power at affordable prices – and it’s only been in business since 2016.

It boasts a customer count around double that of Ecotricity, which was founded in 1996 and offers a similar proposition.

So what makes Octopus so alluring? The name offers a hint: the company has a multipronged approach that includes a variety of enticing options from cars to energy. Octopus itself has been around longer than you might think, having kept a low profile as Octopus Investments, which began trading in 2000 and steadily became the largest solar investor in the UK. Octopus Energy followed suit, and with the fast-approaching global transition to electrified transport, there’s now Octopus Electric Vehicles too.

The latter is headed by former BMW engineer Fiona Howarth, who is acting CEO for the fledgling firm. Howarth is no stranger to the forefront of vehicle technology, having worked on the development of hydrogen-powered cars. However, while hydrogen may be a possible fuel of the future, Howarth saw battery-powered electric vehicles as a more realistic and exciting proposition for today.

Not just another leasing firm

Octopus Electric Vehicles offers several intriguing services for fleets. There’s the more apparent side of the company, which is to lease electric vehicles,

while less obvious is the willingness

to educate companies on future powertrains, for example by holding free events showcasing the latest crop of electric cars and offering test drives. However, beyond these there’s a close link with other Octopus ‘tentacles’ provided by both Octopus Energy and Octopus Investments. These include vehicle-to-grid (V2G) and fleet & infrastructure investment.

V2G is seen as an important factor in the probable mass adoption of electric vehicles, as it has the potential to provide network-level grid balancing using cars rather than static batteries or costly grid upgrades.

Octopus EVs is working with UK Power Networks, the largest DNO (Distribution Network Operator) in the UK, as part of a consortium that includes the Energy Saving Trust and ChargePoint Services, with the ultimate goal of avoiding a multi-billion pound spend on new electricity infrastructure. Instead it wishes to change perceptions of power usage amongst users to alleviate stress on the grid with intelligent use of electric cars.

“It’s a £7m, three-year project, with a £3m grant from Innovate UK that essentially offers V2G chargers. At the moment V2G chargers are £8-10k to buy for domestic use. However, we won’t be pricing it as an expensive charger but instead will offer it as a competitive EV charger bundle along with a leased vehicle. In addition, if you plug in at least three times a week before 6pm and [running] overnight, and let us use your battery to do other things with, we’ll give you money back each month. All of a sudden, your car is starting to work for you.”

The arrangement is predicted to be sold much like a standard car lease and with similar durations, for instance 2-3 year terms. One of the fears of V2G is, however, that if used, the vehicle will be out of charge when you most need it, e.g. in an unexpected emergency situation.

“You’ll still be able to set your minimum threshold for emergency situations, for example you can still ask the car to have 30 miles’ range and ensure a full charge by a set time.”

At the time of writing, Octopus EVs is accepting declarations of interest from businesses wishing to trial the technology under its Powerloop programme.

Despite the appearance of a company still in its infancy, Octopus is no stranger to fleets, having already footed the bill for the high-profile 200-strong fleet of Jaguar I-Paces being deployed at Heathrow.

For fleets, Octopus Electric Vehicles is looking at how an EV works within a company. For example, if an employee is taking an electric car home to charge, the fleet manager needs to have a way to validate how much electricity is used, which can lead to complications – mostly due to home energy bills not separating car and home energy. Octopus is looking at offering this ability via smart meter data or the home charger itself, both of which the company can install. The implication is that fleets will be better able to determine the energy use of electric cars in their fleets, particularly when charged at a driver’s home, enabling far more accurate reporting on energy use.

Octopus is additionally looking at offering a Transport as a Service proposition, whereby the company will put in place all the necessary electric cars, vans or even buses and associated infrastructure for a fleet. The fleet would then be required to pay for vehicle use on a per mile or per kWh basis.

Additionally, “you end up owning the vehicle after a certain number of miles or kWh. Obviously what’s great about this is there’s no risk associated in terms of utilisation,” Howarth adds. This avoids large upfront costs for fleets wishing to turn towards electrification but which are put off by an initially high investment. “The idea is to remove the obstruction for fleets,” Howarth states.

It’s all about energy

Octopus consequently offers an Agile tariff and Octopus Go that both cater for specific needs. Smart meter technology can play a big role in aiding these systems. “Electric cars offer a very different profile to a hair dryer or anything else [plugged in]. Using smart meter data, you can see when the car is plugged in and therefore the consumption that’s associated with it. But you therefore need a smart meter in order to measure that. And although smart meters ping back to the system every half an hour, it’s actually tracking it on a sub-10 second basis,” Howarth comments.

However, how to use that data is where Octopus’ intelligent use of technology comes into play. “You can essentially plug in a dongle that connects to a hub to get the data out very quickly.”

The crux is that Octopus has built up accurate profiles on electric car usage that have facilitated the creation of these tariffs. Octopus Go, for example, offers a cheap 5p/kWh rate for four hours every night, which the firm says is around 25% cheaper than an Economy7 rate. The company will also install a smart meter if there isn’t one already installed. In addition, Octopus Electric Vehicles has teamed up with charge point provider MyEnergi, which installs smart charge points that automatically charge a plugged-in vehicle at the time of the cheapest electricity rates, negating the need for a user to manually configure charge timing.

The final major aspect of Octopus EV is its leasing of electric vehicles. To that end, most are available as per a typical leasing company, however Octopus’ close links with the aforementioned energy supply provision means the company will lease a top-spec Nissan Leaf for around £355/month, which proves even cheaper than Nissan’s own current BCH offer. And, because the company is electric-centric, it’s team are on hand to offer advice to interested or on-the-fence parties.

If your fleet is interested in switching to electric power, Octopus Electric Vehicles’ alternative and comprehensive set of products might be just what the industry needs to tip it over the edge.