Toyota and Panasonic to collaborate on EV batteries

Toyota and Panasonic are to begin laying out the foundations for a joint venture building batteries for electric vehicles, extending a relationship which dates back to 1953. 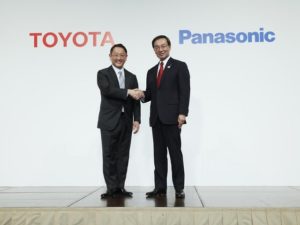 Toyota and Panasonic have worked together since 1953.

Details are limited, but the companies said the collaboration will be aimed at developing the best battery technology in the industry, and offering it to other carmakers as well as using it in Toyota’s vehicles.

The announcement comes as Panasonic steps up its global manufacturing footprint for hybrid and EV batteries. It recently opened a factory in China, augmenting sites in Japan and the United States, the latter in partnership with Tesla, to supply the growing market with lithium-ion batteries.

Toyota, meanwhile, has just begun working with Mazda and Denso, with a view to commercialising electric vehicles over the coming years – a deal which could benefit from the work with Panasonic.