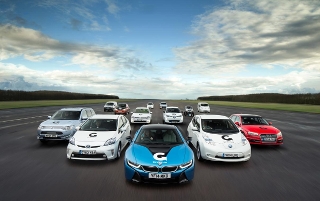 Set up by The Office for Low Emission Vehicles (OLEV), the £35 million Go Ultra Low Cities Scheme will reward local authorities which best demonstrate the potential to deliver a significant increase in the uptake of ULEVs. Each city should demonstrate vision to achieve ‘exemplar status’ to become internationally outstanding examples for the adoption of plug-in cars and vans in their local area. The winning cities will be announced before the end of the year.

OLEV revealed that a variety of inventive proposals have been put forward by local authorities from across the UK, many of which are scalable and could be introduced in towns and cities nationwide. Initiatives featured in the bids include:

Commenting on the scheme, Transport Minister Andrew Jones, said: “We are determined to maintain international leadership on the uptake of ultra low emission vehicles. I look forward to seeing the winning ideas for greener, cheaper cars in action. This funding for eco-cities is part of our £500 million funding programme over the next five years to support British industry and achieve our ambition of almost every car, bus and van in the UK being ultra low emission by 2050.”

Go Ultra Low exists to help motorists understand the benefits, cost savings and capabilities of the raft of new ultra low emission vehicles. The collaborative campaign is the first of its kind, bringing together a consortium of seven leading vehicle manufacturers (Audi, BMW, Mitsubishi, Nissan, Renault, Toyota and Volkswagen), Government and the Society of Motoring Manufacturers and Traders.

Further details are available at www.goultralow.com.