A new vehicle-to-grid unit has been installed at a home in Loughborough as part of a £1.8m project on the domestic use of V2G power systems. 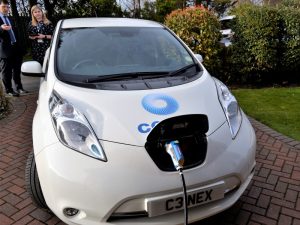 The new vehicle-to-grid unit has been installed at a home in Loughborough.

Said to be the first domestic, UK-built V2G unit in the UK, the unit – developed by Potenza Technology – will help partners in the Ebbs and Flows of Energy Systems (EFES) project to understand the management and interaction of EVs as battery storage within a domestic property and how this can be incorporated into the wider energy system.

As well as the Loughborough unit, the EFES project includes pilots at the Potenza workshop in Coventry and two commercial units at Manchester Science Park.

Funded in part by Innovate UK and EPSRC, the £1.8m project is being completed over three years, and is expected to be delivered by December 2017.

Data from the project will be used by Cenex to develop the economic business case for domestic-scale V2G in the UK.

Early analysis suggests that through utilising just 6% of their car park, Manchester Science Park could save over £14,000 per annum through V2G implementation.

Research also suggests that bidding into energy markets such as the wholesale electricity market or short term operating reserve (STOR) could provide income equivalent to around £60 per month for each vehicle supplying into the scheme.