Volkswagen is aiming to become a market leader in electric vehicles, unveiling a concept car which is previewing the first of a next generation of models. 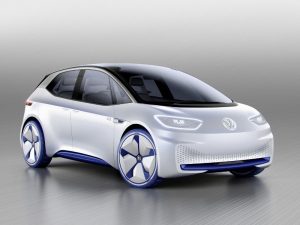 Volkswagen’s I.D. concept previews modular EV technology which can be used in other models.

Revealed at the Paris Motor Show, the I.D. concept is said to offer a hint of a 2020 production model, similarly sized to a Golf but to be sold as a standalone product.

It will be the first to use the new Modular Electric Drive Kit (MEB), which standardises components across different models and will enable lower-cost and quicker development of plug-in versions of cars including the Polo, Golf, Tiguan and Passat.

The concept has a 167bhp electric motor at the rear axle, similar to the layout of the original Beetle, supplied by a high-voltage battery under the floor. This will offer a range of between 250 and 360 miles to a charge, the company said, but with pricing to match an equivalent petrol or diesel Golf.

It also showcases autonomous driving technology, due for introduction from 2025, and internet-connected features, including the ability to have a cloud-stored user identity which remembers contacts, seat settings, climate control and media preferences, and transfers them between cars.

Dr Herbert Diess, chairman of the Board of Management Volkswagen Brand, explained: “In 2020 we will begin to introduce an entire family of electric vehicles on the market. All of them will be based on a new vehicle architecture which was specially and exclusively developed for all-electric vehicles. Not for combustion engine or plug-in hybrid vehicles. The I.D. stands for this new era of all-electric vehicles, for a new automotive era: electrical, connected and autonomously driving.”