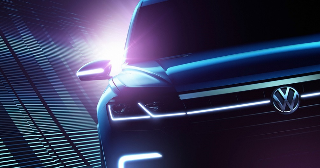 The carmaker revealed the first images of a luxury SUV concept which will break cover at Auto China in Beijing next week, featuring a petrol plug-in hybrid drive which produces 375bhp and offers a fully-electric range of around 31 miles.

Details are limited but it's said that this returns at least 94.2mpg on the European drive cycle, which would result in CO2 emissions of less than 70g/km. That's slightly better than similar plug-in hybrid SUVs from BMW, Mercedes-Benz and Volkswagen Group stablemate Porsche.

It also implies that Volkswagen has opted for a setup where the motor is between the engine and transmission, enabling it to operate in four-wheel drive while driving on electricity. Volvo's significantly lower fuel consumption for the similarly sized XC90 T8 Twin Engine are helped by the petrol engine only driving the front wheels, with an electric motor driving the rear, which improves economy when it's not running on battery power.

The teaser images also show the C-shaped daytime running lights used on all of Volkswagen's plug-in hybrid and electric models. It's unclear yet whether a production Touareg would be offered with the 3.0-litre TDI engine, similar to the Audi Q7 e-tron, or whether it would use a petrol drivetrain globally. Its GTE-branded plug-in hybrids have, so far, been petrol-based.