Volkswagen Group has set out plans to enhance its EV battery cell supply and performance, ensuring that e-mobility becomes “affordable and the dominant drive technology”. 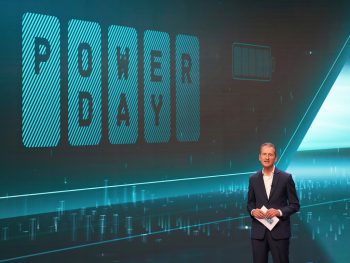 In its first-ever Power Day event, Volkswagen Group presented its technology roadmap for batteries and charging up to 2030

In its first-ever Power Day event, broadcast online and taking the fight to Tesla’s Battery Day, the group presented its technology roadmap for batteries and charging up to 2030, setting out plans to make the electric car attractive and viable for as many people as possible while also securing the supply of battery cells beyond 2025.

Its plans include a substantial increase in cell production in Europe, bringing production inhouse with six ‘gigafactories’ to be up and running by 2030, enabling security of supply along with cost savings. The new battery factories will produce cells with a total energy value of 240GWh per year by the time they are finally completed.

But Volkswagen is also looking to make significant advances with the battery system including all of its components right through to the cell.

“We aim to reduce the cost and complexity of the battery and at the same time increase its range and performance,” says Thomas Schmall, Volkswagen Group board member for technology. “This will finally make e-mobility affordable and the dominant drive technology.”

Aside from the planned in-house production, significant cost benefits are expected primarily thanks to a new single battery format, dubbed the unified cell. It is set to be launched as of 2023 and will be installed in up to 80% of all electric vehicles within the group in 2030.

Further savings will be delivered by optimising the cell type and deploying more innovative production methods as well as consistent recycling. As a result, VW says it thinks it can reduce battery costs in the entry-level segment by up to 50% and by up to 30% in what it terms as the volume segment.

Volkswagen has also set out plans to “vigorously” pursue expansion of the public fast-charging network globally. It’s agreed cooperation agreements in Europe with the energy companies BP (Great Britain and Germany), Iberdrola (Spain) and Enel (Italy), which run in addition to its existing Ionity joint venture with BMW Group, Daimler AG and Ford.

With these partners, the company intends to operate about 18,000 public fast-charging points in Europe by 2025; a five-fold expansion of the fast-charging network compared to today and about a third of the total demand predicted on the continent for 2025.

The tie-up with BP will establish about 8,000 ultra-fast-charging points throughout Europe, with the majority of these in Germany and Great Britain.

The cooperation with Iberdrola will cover main traffic routes in Spain, while in Italy, Volkswagen wants to collaborate with Enel to establish the fast-charging network both along motorways and in urban areas.

The group’s work will also prioritise bidirectional charging; models based on the MEB platform will support this technology from 2022 and the carmaker will offer a complete package with all modules and digital services – from the bidirectional wall box to energy management.

“E-mobility has become core business for us. We are now systematically integrating additional stages in the value chain. We secure a long-term pole position in the race for the best battery and best customer experience in the age of zero emission mobility,” said Herbert Diess, chairman of the board of management of the Volkswagen Group.