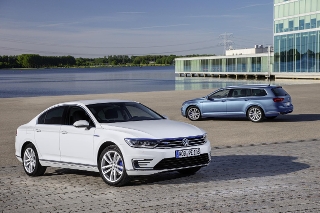 The model, which is available in saloon and estate bodystyles, is already open for advance sales in some European markets and plays a key role in the brand’s electric motoring stategy following the launch of the Golf GTE.

The drivetrain is similar to that of the Golf GTE and features a 154bhp 1.4-litre TSI petrol engine and 114bhp electric motor, which combine to produce 215bhp and propel the Passat to 62mph in under eight seconds.

Figures have not been confirmed for the UK but in Europe, emissions for both models start at 37g/km with official NEDC fuel consumption of 1.6l/100km (177mpg).

The E-Mode can be used for up to 50km (31 miles) and can be deployed at the touch of a button.

In the UK, the Passat GTE is expected to open for ordering early Q4, which would see vehicles start to arrive in early Q1 2016.