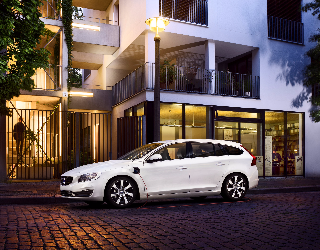 The D5 Twin Engine uses the same five-cylinder diesel engine and 68bhp electric motor as in the D6 version introduced in 2013, but the former is de-tuned to 163bhp instead of 220bhp.

As both models feature the same battery pack, under the boot floor, the electric range of 32 miles is unaffected, and it offers the same 48g/km CO2 emissions and 7% BiK for drivers as the original version.

Selwyn Cooper, head of business sales for Volvo Car UK, said: “The addition of the V60 D5 Twin Engine will only increase the V60’s appeal for business users, thanks to its impressive CO2 and tax figures, and builds on our global electrification strategy of introducing other plug-in hybrid vehicles to our range.”

Previous: Trials begin on world's first eHighway in Sweden
Next: Route Monkey in partnership for EV scheduling and navigation tool for fleets