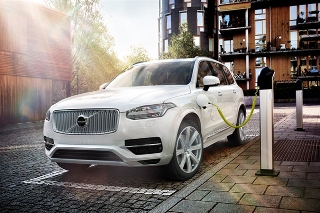 The Volvo’s drivetrain is similar in concept to the V60 Plug-in Hybrid, but in the XC90 it uses one of Volvo’s new four-cylinder Drive-E turbocharged petrol engines to drive the front wheels, producing 316bhp, with an 87bhp electric motor at the rear axle – the latter is more powerful than had been announced previously. Fully charged, it can travel up to 26 miles on electricity.

Having claimed 60g/km during the pre-production phase, the XC90 T8 Twin Engine has achieved CO2 emissions of 49g/km on the test cycle for plug-in hybrids, with a combined fuel economy figure of 134.5mpg.

For now, that’s enough to comfortably put it ahead of premium SUV plug-in hybrids. The Porsche Cayenne S e-Hybrid emits 79g/km, while the forthcoming BMW X5 and Mercedes-Benz GLE plug-in hybrids emit 77 and 78g/km respectively. However, Audi – the only manufacturer to use a diesel engine – is forecasting sub-50g/km CO2 emissions for the Q7 e-tron, which is also due later this year.

Dr Peter Mertens, Senior Vice President Research & Development at Volvo Car Group, said: “We have been working hard to earn our competitive edge and to give our customers the ultimate combination of performance and low fuel consumption.

“Our Twin Engine technology has enabled us to build on our heritage of efficient powertrain development in a completely new way. Thanks to our new scalable product architecture, and our world class four-cylinder engines, we have a clear and leading position.”