By Natalie Middleton / 1 month ago / International News / No Comments

Volvo has set out its vision for its future all-electric models, including revealing its Concept Recharge and outlining plans to focus on range and fast charging for future EVs. 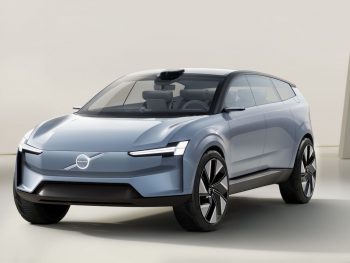 The carmaker is to phase out everything except hybrid and electric models by 2025 and discontinue all combustion engines by the end of the decade and, at its Tech Moment event this week, said it’s looking to become a leader in the premium electric car segment.

Volvo also revealed that it will focus on range and fast charging for its next generation of fully electric cars – and will target a 621-mile (1000km) range before the end of the decade.

The new Concept Recharge – revealed at the event – is said to provide a manifesto for the next-gen all-electric Volvos.

But the new Concept Recharge – which gives an insight into the all-electric replacement to the XC90 due next year – previews how its next generation of EVs will evolve, using a dedicated electric platform with a flat floor, extended wheelbase. This brings shorter overhangs and more interior space along with a large storage area between the front seats.

As a result of this, in the Concept Recharge, designers have repositioned the seats, changed the roof profile and lowered the bonnet of the car, enhancing aerodynamics and therefore range.

“With the Concept Recharge, we continue the rich roots of Volvo’s design DNA in a modern and fresh way as we move into our all-electric future,” said Robin Page, head of design at Volvo. “It represents everything we believe customers expect from a pure electric Volvo and we’re excited to take this philosophy into our next generation of cars.”

At its Tech Moment event, Volvo also revealed how new technologies will support its plans for enhanced  range and fast charging for its next generation of EVs.

Its current focus is on bringing battery cell technology development and production closer to home and it aims to tailor its future batteries to the needs of its customers – both in terms of longer range and faster charging times.

This will be done by improving lithium-ion battery technology on its forthcoming second generation of electric cars, starting with its electric-only replacement to the XC90. And by mid-decade, as it introduces its third generation of electric cars, Volvo Cars plans to improve the range further and integrate the battery pack into the floor of the car, using the cell structure for overall vehicle stiffness and improving efficiency.

In the near term, Volvo plans to work with leading Swedish battery company Northvolt to further increase the energy density in its battery cells by up to 50% compared with what is on the market today.

Current charging times are expected to be cut almost in half by the mid-decade, thanks to better battery technology and continuous improvements to software and fast-charging technology. The successor to the XC90 will also have vehicle-to-grid capability.

And while the company will increase the battery energy in its cars over the coming decade, it will also work to continuously reduce their carbon impact.

It’s aiming for battery cells from its planned collaboration with Northvolt to be produced using 100% renewable energy, while working with other battery suppliers to do the same by 2025. Volvo is also looking into how to remanufacture or reuse batteries, and is also investigating potential second-life applications, such as energy storage.

“We want to offer our customers sustainable pure electric cars that makes their lives easier and more enjoyable,” added chief technology officer Henrik Green. “Through smart innovation and collaboration with key partners, we can give customers what they want – more range, faster charging and lower costs – and further boost widespread adoption of electric mobility.”