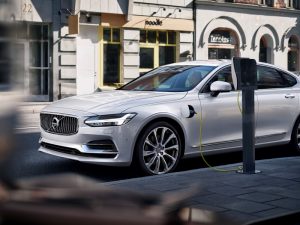 Volvo might have more experience with different hybrid types than any other manufacturer, having offered both diesel and petrol hybrids for some time. The XC90 T8 Twin Engine Hybrid is not the first plug‐in hybrid from Volvo, the V60 D6 AWD has that distinction, but the petrol/electric variant is the first hybrid to carry the T8 badging. It won’t be the last. T8 will become the flagship model in each new Volvo range.

Senior project manager for the XC90 Lars Lagstrom says that the petrol engine/electric motor combination was chosen because it can be sold in all global markets where Volvo is represented. Diesel may have been dealt a mortal blow for cars in the US following the VW emissions story from last year but a petrol hybrid will be as acceptable in the US as it is anywhere else.

Not surprisingly he expects the XC90 T8 to do well in markets where low CO2 emissions are encouraged by tax benefits and where governments offer incentives for hybrid and electric models. “It’s for people who would like to have a fast car, a roomy car, it’s a full seven‐seater and also for those who would like the tax benefits”, he says.

Those tax benefits have already helped sales in some parts of Europe, “We can see that in the Netherlands. We delivered 1,600 cars before the end of 2015 because they then changed their rules,” says Lagstrom, “We were the biggest hybrid car manufacturer in the Netherlands due to the tax incentives they had there.”

Under current European testing, hybrids return some spectacularly good CO2 emissions and fuel consumption figures and the XC90 T8 is no exception with 49g/km and 2.1l/100km on the combined test cycle. Hybrid testing will change when a new emissions test cycle is introduced, but that is still some years away. “The new test cycle will correspond more to the American way, because it will show the fuel efficiency that you could normally achieve by driving the car in a sensible way,” comments Lagstrom.

“We at Volvo have foreseen that we cannot come that much further down in fuel efficiency with combustion engines, we need to add the electrification. This represents the future for reduced fuel consumption and then we need to improve the driving range on electricity and the efficiency of new battery cells. By fitting it in the same package that we have, we will get longer range and with that, reduced fuel consumption, although we know that the new test cycle will probably increase the figures on paper compared to today’s figures.”

Volvo has already discussed a battery electric XC90 and the target is that in 2019 there will be an electrical version that can cover 500km before needing a recharge.

Looking to the next emissions limits for Europe – Euro 6c, due in September 2017, Lagstrom believes that Volvo will have to make changes for diesel engines. “It will need selective catalytic reduction. There are no other known technologies today to do it.” Volvo, like every other car manufacturer, will therefore need the AdBlue additive to help reduce emissions of nitrogen oxides further from its diesel models.Hybrids, with longer range and a pure electric XC90 will join the Volvo range in time. The XC90 T8 is just the beginning, Lars Lagström tells John Kendall.