Whatever happened to hydrogen?

By Contributor / 2 years ago / Features / No Comments

The number of battery electric passenger car models continues to rise as diesel demand drops. But are other alternatives a viable solution to future transportation needs? Dave Moss investigates. 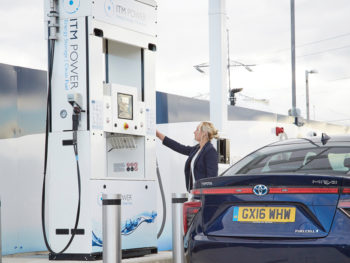 In November 2017, the European Commission proposed new CO2 emission standards for cars and light commercials sold in the EU until 2030. A 15% emissions reduction over agreed 2021 standards by 2025 was suggested, with a 30% reduction by 2030 – combined with manufacturer incentives to encourage battery electric (BEV) and fuel cell electric vehicle (FCEV) production. Critics feel the proposals aren’t enough and with Europe’s political situation slowly changing, suggested tougher targets of a 25% reduction by 2025 and 50% reduction by 2030 could yet become reality.

Higher targets will increase manufacturer pressure to reduce average vehicle emissions through increased sales of battery electric and fuel cell-powered vehicles. BEV sales recently passed one million units worldwide, and figures from automotive data research specialists JATO, indicate 1.08m alternative fuel vehicle sales in the first quarter of 2018. Yet only 653 of them were fuel cell powered – 4% less than in 2017 – bringing 19 years’ worth of FCEV sales worldwide to just 6,062 cars.

Devin Lindsay, a principal analyst at automotive intelligence consultancy IHS Markit, feels several factors have restricted FCEV development. “Getting the price and size of the fuel cell stack right has been a big hurdle and the global recession left manufacturers with limited R&D funds, demanding a clear focus,” he reasons. “BEV development was then prioritised as it was closer to market-ready. R&D is still a major factor for some and conventional engines continue to improve, so makers can’t focus on just one powertrain solution… they’re taking care to retain traditional customers.”

High-profile FCEV trials are being used to convey their advantages to public and fleet operators alike. The €26m ($30.4m) ZEFER project is among the most ambitious so far, running 180 vehicles as taxis, private hire and police vehicles in Paris, Brussels and London – cities chosen to demonstrate the vehicles’ particular strengths. Rebecca Markillie, communications manager at ITM Power, one of the fuel infrastructure suppliers closely involved, sees the project demonstrating FCEV ability in demanding applications. “By proving their practicality in these situations, the project will enable fleets to appreciate their capabilities where EVs may not be practical,” she says. “It’ll also help accelerate the commercialisation of hydrogen as a zero-emission vehicle fuel, with project results and data going to taxi and private hire operators, city regulators and the hydrogen community – and to support national and regional governments and others in continued investment in hydrogen mobility.”

Such trials may raise the profile of hydrogen-powered vehicles, but refuelling remains a big concern. “The lack of a refuelling infrastructure is the largest hurdle,” says Devin Lindsay. “Until the ability to refuel is guaranteed anytime and anywhere, serious growth will remain delayed.” Arvind Leo, senior research analyst, automotive and transportation, at Frost & Sullivan, agrees:

“Manufacturers must overcome certain major challenges before fuel cell vehicles will see adoption at the same pace as EVs,” he says. “These include sustainable hydrogen production, reducing costs, and more model availability. But building a modern hydrogen fuel station costs about $750,000 to $1m and that’s the primary choking point in infrastructure expansion.”

Things are moving – but slowly. At the end of 2017, the Hydrogen Council estimated over 5,000 hydrogen refuelling locations were planned, while Frost & Sullivan’s analysts believe that over 7,500 could be operational by 2030. Yet just 64 new stations opened worldwide in 2017, including 24 in Germany, making its network the second largest worldwide. Japan has most, with 91 public stations, while the USA has 40.

A recent study of fleet operators on future take-up of hydrogen mobility by the UK-based H2 mobility partnership found clear preferences for low-emission, long-range, fast-refuelling vehicles. Operators were unwilling to pay large premiums for FCEVs, and proved very sensitive to taxes and charges imposed on company vehicles. Special tax structures or exemptions making FCEVs closely competitive with diesel vehicles were popular, with efficiency and zero-emission levels to match BEVs also important because of company commitments to responsible environmental behaviour, and recognition of a growing need to ‘future-proof’ fleets wherever possible. 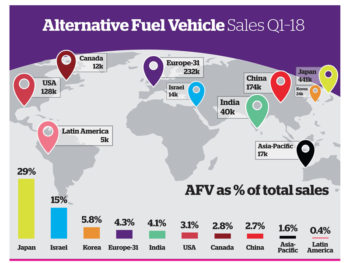 Just three FCEV models are currently available worldwide: the Toyota Mirai, Hyundai Nexo – replacing the iX35 (Tucson in the US) and Honda Clarity. Manufacturers won’t discuss future plans, but industry-watchers believe at least 20 models – from up to 10 different manufacturers – could join the FCEV marketplace in the next five years. Rumoured names include Mercedes-Benz, Lexus, BMW and Kia – with other major names soon following.

“The global FCEV market is estimated to reach about 583,360 units by 2030, dominated by countries such as Japan and South Korea,” predicts Leo. “We’re projecting FCEV markets in Europe and North America reaching around 117,000 units each, with Toyota and Hyundai-Kia staking claim to becoming global leaders in fuel cell technology.”

Toyota’s Mirai is currently offered in 11 countries and is the best-selling FCEV to date, with over 3000 sales last year. “We anticipate global FCEV sales increasing significantly after 2020, to at least 30,000,” states Jon Hunt, UK manager of alternative fuels at the Japanese manufacturer. “We’re building two major new facilities in Japan to support that expansion, and aiming for over 10,000 sales annually from 2020.”

More models will help unlock FCEV sales – and ITM Power’s Markillie feels the vehicles themselves will play a part. “Drivers want to be able to refuel like they do today – in minutes. They want the range, a good-looking car and something that is comfortable and drives well,” she says. “Ultimately they do not want to compromise what they have been used to, and hydrogen as a transport fuel allows this.”

That sort of outlook in today’s diverse car market could drive some interesting developments as FCEV sales build, and Lindsay anticipates innovation: “I would expect development of a vehicle sold on customers’ desire for performance and amenities, not just to ‘be green,’ he says. “Tesla has shown some consumers are willing to pay for a luxury performance vehicle with unique amenities. So I expect a fuel cell- based vehicle could capture attention with some sort of performance breakthrough, or high levels of autonomy, making it more attractive – and worthy of a relatively higher price tag.” 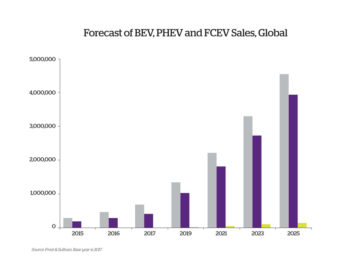