By Natalie Middleton / 5 days ago / UK News / No Comments

Jaguar’s zero-emission Jaguar I-Pace has been converted into a rapid response vehicle by VCS. 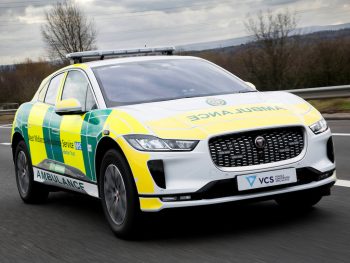 VCS has already delivered two examples of the fully electric I-Pace RRV to West Midlands Ambulance Service, which will go on duty immediately

According to the ambulance conversion specialist, the new I-Pace provides the perfect base for a zero-emission RRV thanks to its range of up to 292 miles, the ability to add up to 78 miles of range per 15 minutes when fast charging (100kW) and a 0-62mph time of 4.8 seconds.

VCS has already delivered two examples of the fully electric I-Pace RRV to West Midlands Ambulance Service, which will go on duty immediately, and it’s able to tailor future vehicles to meet other services’ requirements.

The arrival of the Jaguar I-Pace RRV follows the introduction by VCS of its E-DCA fully electric dual crewed ambulance last year, said to be a first for the sector and currently being trialled on the front line by West Midlands Ambulance Service.

West Midlands Ambulance Service chief executive Anthony Marsh said: “Working with industry specialists like VCS has continually reduced our impact on the environment by lowering our CO2 levels, and ensured that patients receive the highest standards of safety and comfort.

“With an all-electric ambulance already in our fleet, which was launched last year, it’s hugely exciting to now have two fully electric response cars to add to our operational vehicles in Birmingham.”