Mitsubishi has refreshed its Outlander PHEV for 2017, including reduced CO2 emissions and a new EV priority mode. 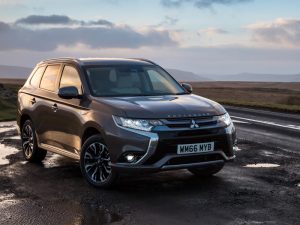 CO2 emissions for new Outlander have been reduced to 41g/km.

The minor changes, which follow an extensive update last year, are mainly focused on improved running, performance and efficiency for its plug-in hybrid, including the introduction of a new EV Priority Mode. Available across all variants, this enables the driver to keep the Outlander PHEV in electric mode, provided there is sufficient charge in the batteries.

CO2 emissions are down by 1g/km to 41g/km with the official combined fuel economy up to 166mpg – a 6.4% improvement compared to the previous 148mpg. The electric-only range also sees a minimal increase from 32.5 miles to 33, while the time taken for rapid charging has also been improved, with a charge up to 80% now taking approximately 25 minutes instead of 30 minutes before. Regenerative braking technology has also been enhanced and the drive battery output has been improved by 10%

Powertrain and chassis have been revised across all variants, with new dampers and rear suspension bushes, making it a quieter and more refined to drive than ever. The 2017 Outlander PHEV also delivers more performance with improved acceleration in EV mode compared to its predecessor.

The 2017 Outlander PHEV also introduces enhanced safety features, including the addition of Pedestrian Detection to the Forward Collision Mitigation technology, standard on the Mitsubishi Outlander 4hs and 5hs versions, while Blind Spot Warning and Rear Cross Traffic Alert have both been introduced on the 4h variant to assist the driver when reversing out of a space.