The new BMW 5 Series will be available as a plug-in hybrid from next March, offering CO2 emissions of 49g/km. 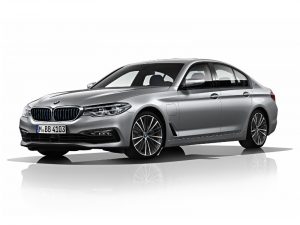 Launching shortly after the first cars arrive in dealerships, the 530e iPerformance will get the same powertrain used in the 3 Series and 7 Series, combining a 2.0-litre turbocharged petrol engine with an electric motor.

It indirectly replaces the ActiveHybrid 5, a high-performance hybrid designed more for North America and China but with relatively high CO2 emissions limiting its appeal in Europe. Plug-in versions of the 3 Series are already proving popular in the UK, helped by large tax incentives for company car drivers.

Despite the attractive CO2 emissions, this is still a high-performance car; with both power sources combined, the 530e iPerformance produces 248bhp and reaches 62mph in 6.2 seconds from rest. Yet, fully charged, it can travel 28 miles on electricity at up to 87mph, contributing to tax-conscious CO2 emissions of 49g/km.

The seventh-generation 5 Series is available to order this month, getting a large amount of technology from the 7 Series. This includes adaptive cruise control with steering assistance at up to 130mph, remote parking via the key, and the new touchscreen iDrive system with gesture control, as well as live on-street parking, a WiFi hotspot and real-time traffic information.

Pricing for the 530e iPerformance has not been released yet, but the range will start from £36,025 on the road.

Previous: Electric car sharing service goes live at Gatwick
Next: More than 500k EVs on european roads by end of 2016