A home for hydrogen?

By Alex Grant / 2 years ago / Features / No Comments

A collaborative project in Swindon is tasking hydrogen fuel cell cars with the rigours of a life on fleet. Alex Grant dropped in to find out how it all works. 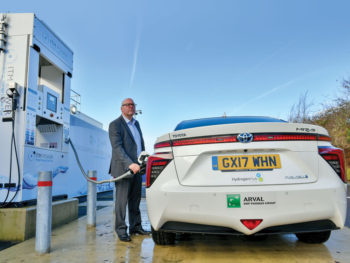 As a technology for shifting consumers away from fossil fuels, hydrogen fuel cells have long seemed like a panacea. These offer the short refuelling times and long range most drivers are used to, but without the noise and air quality issues of a petrol or diesel engine. And yet, despite decades of concept cars and prototypes, it’s consistently seemed around ten years away from being commonplace. Perhaps until now.

In Swindon, a consortium of 30 companies is aiming to narrow the gap between concept and reality. The Hydrogen Hub, launched by energy consulting company Ecuity three years ago, has been putting the technology to the test with end-users – not just in cars, but with its sights on forklifts, buses, and even heat and power applications. Half way along the M4 corridor, next-generation technology is already part of daily life.

Cars make up one of the four work streams, overseen by Arval. And for SME development manager, Paul Marchment, the tipping point is looming ever closer: “We’re probably at about ground minus three [years] in terms of this technology really taking off,” he says. “In three years’ time, when we have more stations, there’s more product and people are more aware of the usage, that’s when this will really fly.”

For Marchment, the Hub is a logical progression after 12 years working with alternative fuels. His involvement started around two years ago, just ahead of the leasing and fleet management specialist deploying its own Toyota Mirai fuel cell car. It has since helped fund other fleets adopting vehicles, with a view to getting a head start understanding how it works for businesses.

“We’re agnostic about the technology, we just want to make sure it gets deployed and used in the right place, by the right end-users. And if you can’t do it in Swindon, where are you able to do it? There’s a real opportunity to build a fleet around here and demonstrate that this can be done at a reasonable scale,” he explains.

Seven of the planned 15 cars have already been deployed. End-users are diverse; Arval’s own demonstrator, pool cars for Nationwide building society and the National Trust, and a multi-use vehicle for the nearby Science Museum storage facility. Johnson Matthey, which develops fuel cell components for OEMs a stone throw from Arval HQ, has one too.

Early vehicles are finance leased, backed by OLEV funding, and Marchment says all are used as regular fleet cars. Participants have been keen to get as many employees behind the wheel as possible, and manufacturers have been supportive – for example, Toyota ensures local dealers are trained to service Mirais if cars are deployed locally.

“A lot of new technology gets to market through fleets, because leasing a vehicle is risk-free. To get this technology into the second and third-hand market, we rely on [fleet]. If we can understand the technology, the maintenance, the running costs, then that helps us to have grown-up conversations both internally and with the end-user.”

Information is key with unfamiliar technologies. So, behind the project, the participants are part of a working group which shares best practice and reports back to OLEV. Arval has worked on driver training and brought in 50 of its largest corporate customers to explain the concept. Familiarisation helps, but Marchment believes the UK’s nascent refuelling network is the biggest hurdle – because of the long range, Johnson Matthey believes only 80 hydrogen stations would be needed for nationwide coverage.

Of course, it’s a proverbial ‘chicken and egg’ situation, and that’s where the project helps, as Hydrogen Hub manager, Clare Jackson, explains: “Because of the way the funding works, the vehicles and stations go down in the same project – each station will have funding for a certain number of vehicles, they’re looking for a base load. The stations are most reliable when they are used regularly, so having those things together – the station has to go in before the cars – is really important for the technology working,” she says.

Marchment agrees: “You need someone like an oil company to back the technology, as they’ve got the real estate to deploy it. We’ve seen Beaconsfield and Cobham, where Shell has put it next to the unleaded and diesel pumps. From a public perception, they’re all in the same place now, which will help with the transition going forward.”

From a fleet perspective, vehicle choice is just as important. Arval is already discussing commercial vehicles with manufacturers – a market where fuel cells could power refrigerators and other equipment, and offer long-range driving without the need for electric last-mile vehicles. The possibilities might be even greater than for cars.

“I think everybody is in agreement that where this technology will come into its own is the bigger stuff – trucks, buses, trains, light commercial vehicles. A lot of OEMs have struggled to electrify their vehicles without compromising on range and cargo area. The range is uncompromised with this technology, so it sits really well in that area,” explains Marchment.

For now, well-placed infrastructure can support the early adopters. The project opened a second publicly accessible refuelling station in September, a larger-capacity unit outside Johnson Matthey’s factory, which cures some of the reliability issues early users had experienced beforehand. And the focus now is on phase two of the Hub, targeting another 10 fleet vehicles (with new and existing users) to make the most of it. Arval is also on the cusp of having a leasing model in place for FCEVs – straightforward ordering is vital when the UK is competing with other countries to get its share of the limited global vehicle stock.

“Because we have OLEV funding it removes a significant amount of the risk for us, so the pricing and risk teams we’re working with are a lot more relaxed,” says Marchment. “To be sustainable and make sure we can facilitate more of these vehicles, we need that contract hire model, and we’re making good strides towards that now. People who were sat on the fence are more thinking they can make it work. We’ve got those [ten] vehicles secured, so we’re finding homes and I’m in advanced conversations with two or three end-users.”

Meanwhile, a second Hydrogen Hub is now running in Oxford, and there are opportunities for the two projects to complement each other. Indeed, Oxford might be set to get ahead of Swindon on some work streams – particularly buses, driven by a planned zero emission zone in Oxford and the right conditions being in place for deployment.

“[Oxford is] a double-deck city, and battery double-deckers ruin the roads, so the technology future there is hydrogen,” says Jackson. “It’ll probably happen before Swindon, and there’s a nice little bus route between [the two cities] which might be a good start. Then Swindon will start taking buses as well.”

In Swindon, the expertise generated so far is also being put to wider use. Arval recently hosted an event in Lydiard Park, targeting businesses in the morning and consumers in the afternoon, with a view to answering questions about the technology. It proved so successful that six more are being planned for 2019. And, with the GCSE Chemistry syllabus now including fuel cells, the company has also created a lesson for teachers to download, explaining how hydrogen can play a role in the wider energy system. Marchment sees engagement with the next generation as a vital step for establishing the technology in the UK.

So, while there are unquestionably hurdles to overcome, the Hydrogen Hub is showing how what seems like tomorrow’s technology can already be a versatile solution today. And, as ever, fleets are playing a fundamental role in bringing it to market.

Almost next door to Arval headquarters, Johnson Matthey’s Swindon factory was constructed in 2002 and produces fuel cell membranes for OEMs based on 20 years of research and development. For the last four years, the company has had its own Hyundai ix35 Fuel Cell on fleet, and commercial director Mike Petch sees the technology having a widespread role next to electric cars.

“It’s great technology,” he says. “We see it as very complementary to battery cars. If you know you need your car every minute of the day, or if you’ve got long-mileage sales guys then it’s much better than batteries. As you move to heavy-duty vehicles, fuel cells offer an even bigger advantage. In a truck you won’t do 700 miles on a battery, but you could easily deploy a fuel cell system that could do that.”

Since September, Johnson Matthey has also hosted a publicly accessible hydrogen filling station – this makes enough fuel for 16 full tanks per day, or up to five back-to-back limited by the compressor. And, as modular technology, it can be scaled up to meet the needs of local fleets and drivers.

“We’re keen to see infrastructure in this country, as that will mean there’s cars being sold here, which increases the probability of building some of the cars here,” Petch adds. “But they’ll only send them here if people want to buy them, and they’ll only buy them if they think they can refuel them.” 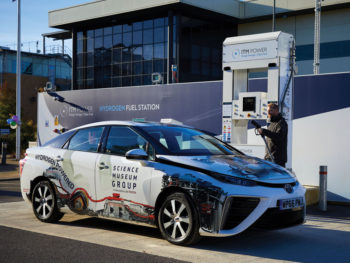 The Science Museum now has two Toyota Mirais on fleet

It’s a little-known fact that the Science Museum operates a large storage area just outside Swindon – some 500 acres, with six miles of perimeter roads, and a regular need to transport staff and objects between there and London. For head of national collections, Matt Moore, adopting FCEVs ties in neatly with inventory which includes the world’s first hydrogen-powered car – 1956 Daff 44.

The company now has two Toyota Mirais on fleet, picked because they were available (unlike the Hyundai ix35 Fuel Cell) in right-hand drive. Each has done around 10,000 miles, used for runs into London but also as pool cars and for security teams on site – replacing diesels which had frequent filter problems due to frequent short journeys.

By comparison, the Toyotas have been faultless. In fact, Moore adds, the biggest issue has been the compromise in load space – the Mirai isn’t designed for hauling large museum pieces – and the risk of scratching high-end interior materials with bulky loads.

“I don’t think we knew what to expect, because there wasn’t much information about how it would perform. So we always viewed it as an experiment, and our mission was to talk to other organisations and get them to come and have a go in it. We’ve used it in the way you would expect to be able to use any car, which is the highest accolade you can give it.”