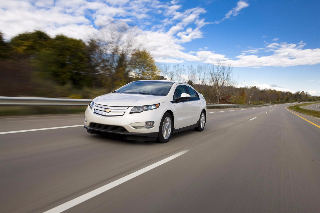 The Idaho National Laboratory’s report analysed usage patterns for 4,000 Nissan LEAFs and 1,800 Chevrolet Volts participating in Department of Energy’s EV Project and ChargePoint America programmes – said to be the largest plug-in vehicle infrastructure demonstration in the world – over a two-year period.

Access to workplace charging was found to be a significant enabler of longer distances, particularly for LEAF drivers, who averaged 11,882 miles per year if they could plug in at work; a 22.5% increase on the 9,697-mile average for all LEAFs studied.

The Chevrolet Volt recorded similar improvements, averaging 11,448 miles on electricity when drivers could charge at work, up 25.6% on the 9,112 miles for those who couldn’t. Workplace charging enabled Volt owners to cover, on average, 83.2% of their 13,759 annual mileage without using any fuel, compared to 74.5% for all vehicles studied.

Both the LEAF and Volt were also able to exceed the U.S. national average of 11,346 miles using only electric power, if they had access to workplace charging equipment.

With or without this access, the two cars also covered near-identical annual mileages on electricity, despite the Chevrolet offering a significantly shorter range. Volt owners averaged 1.5 charges per day, compared to 1.1 times for the LEAF, and tended to deplete the battery fully before plugging in.

The majority of charging – 84% for the LEAF, 87% for the Volt – was done at home, usually scheduled to start after midnight, while most of the remainder was done at three locations or less.

Previous: 300-mile range for next Nissan LEAF
Next: EV batteries to reduce demand spikes and fossil fuel use