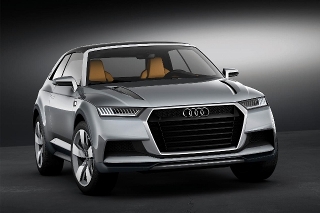 Announced during its 126th Annual General Meeting, the carmaker revealed little about the newcomer, but said it would be a sports-focused model with an electric drivetrain, launching into the upper-mid size SUV segment.

This suggests Audi could be working on a coupe-like SUV based on the next Q5, though it’s unclear whether the drivetrain will be fully electric or a plug-in hybrid or range-extender with an electric four-wheel drive system.

Both technologies have been demonstrated in concept vehicles and production models. A fully electric SUV, meanwhile, would offer a unique rival to the forthcoming Tesla Model X.

Audi is investing €24bn (£17bn) in its facilities and staff in the meantime, and the eight new models will include two further SUVs in the Q range, beginning with the Q1 next year.

The Q1 will share its platform with the A3 and marks Audi’s entry into the hotly-contested compact crossover segment, while the Q8 will give Audi a rival to the Mercedes-Benz GL-Class (soon to be renamed GLS-Class), when it completes the SUV range in 2019. In both cases, platform sharing would enable Audi to equip them with an e-tron plug-in hybrid drivetrain.