Audi has expanded its electric vehicle line-up with the Q4 e-tron crossover, priced from £40,750 and with up to 316 miles. 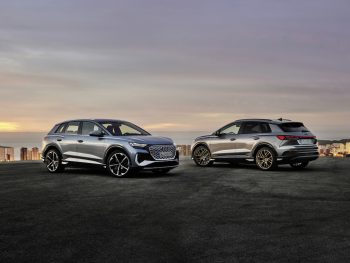 It’s the first of Audi’s EVs to be based on the VW Group’s MEB platform, also used for the Volkswagen ID.4 and the Skoda Enyaq, and will be offered in two bodystyles: the Q4 e-tron compact SUV and the Sportback SUV-coupe.

The two electric additions to the popular compact SUV sector are expected to provide attractive reasons for going electric; from pricing to their electric range and charging performance.

The entry-level Q4 35 e-tron and the Q4 Sportback 35 e-tron models use the 52kWh battery teamed up with a 170hp electric motor on the rear axle, giving torque of 310Nm and, for both bodystyles, a 9.0-second 0-62mph acceleration, a restricted 99mph top speed and a WLTP-certified range of up to 208 miles on a full charge in the SUV (Sportback range data to be confirmed).

For the Q4 40 e-tron, the larger 77kWh battery is teamed up with a 204hp electric motor on the rear axle, with the same 310Nm of torque and restricted 99mph top speed but an 8.5-second 0-62mph sprint time and up to 316 miles of range in the SUV (Sportback range data is again still to be confirmed).

At the top of the drivetrain line-up are the Q4 50 e-tron quattro and Q4 Sportback 50 e-tron quattro, which also use the 77kWh battery and 204hp motor on the rear axle, but with a 190hp motor on the front axle, giving all-wheel drive along with a total 299hp and 460Nm of torque. Both bodystyles have a 6.2-second 0-62mph time and a top speed of 111mph. Driving ranges of c.295 miles are expected for UK versions of both models, subject to confirmation.

The 52kWh and 77kWh batteries can be charged at up to 100 or 125kW respectively. At a 125kW rate, the battery can go from 5 to 80% in 38 minutes. Drivers can also use the myAudi app to activate charging remotely using a smartphone and set the cabin temperature remotely.

The 4,590mm long body is said to bring interior space more closely comparable with the full-size SUV class, including good rear legroom, while boot capacity is more like a midsize SUV; the volume of the luggage compartment is 520 to 1,490 litres in the Q4 e-tron and 535 to 1,460 litres in the Sportback. They also come with an electronic tailgate.

Equipment includes a new augmented reality head-up display, part of the standard specification for Vorsprung versions and a key component of the optional Technology Pack available for all other variants. The new Q4 e-tron models also get a double-spoke steering wheel with touch-sensitive controls, and a new premium sound system supplied by Sonos is standard to Vorsprung versions and available for all others as part of the optional Comfort and Sound pack.

Also standard across all models is a central MMI touch monitor, operating infotainment and navigation and with acoustic feedback and natural language voice control. An 11.6-inch MMI display, the largest ever for an Audi, will come later. The Audi virtual cockpit is again standard equipment while an upgraded Audi virtual cockpit plus is installed in Vorsprung versions, and available for all others as part of the optional Technology Pack.