Providing a rival to models including the BMX X6 and Range Rover, Audi’s flagship Q8 SUV has been revealed in near-production concept form at Detroit. 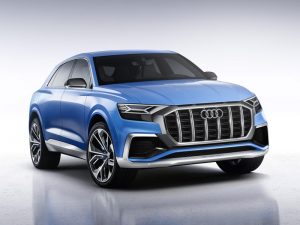 The lithium-ion battery is located in the rear and enables an electric range of 37 miles.

Due for launch next year, the Q8 sits on the same platform as the A7 and according to the brand brings the “typical spaciousness of an SUV with the elegance of a coupé”.

The concept uses a plug-in hybrid combining a 328bhp 3.0 TFSI with an 134bhp electric motor married up with an eight-speed tiptronic gearbox and Quattro permanent all-wheel drive system. Total power is 443bhp and the concept accelerates from 0 to 62mph in 5.4 seconds on its way to a top speed of 155mph.

A lithium-ion battery is located in the rear and enables an electric range of 37 miles. Total range is claimed to be up to 621 miles. A full charge with 7.2 kW output takes about two and a half hours. Official economy under the NEDC cycle is up to 122mpg with CO2 emissions of 53g/km.

The concept also features a predictive efficiency assistant, which in production models supports the driver, providing the hybrid management system with highly detailed information about the near surroundings for this purpose and also taking into account data from the navigation system and Audi connect Car-to-X services are also considered.

The Q8 also three driving modes for the Audi drive select system: “EV” mode prioritizes electric driving, while in “hybrid” mode the decision regarding the drive type is left largely to the hybrid management system. In “battery hold” mode, it saves the available electric energy for a later time.