Audi is introducing range-topping ‘S’ versions of its e-tron and e-tron sportback this summer, bringing up to 503hp of power and 973Nm of torque along with increased range. 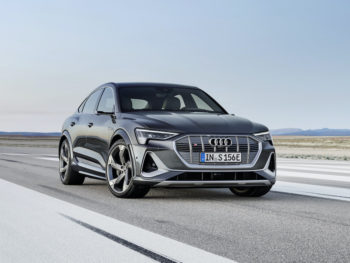 Said to mark a first for volume-produced battery electric vehicles, the SUV and coupe-SUV models are priced from £87,000 OTR and £88,700 OTR respectively and will use three electric motors; two at the rear and one upfront. In normal driving mode, only the rear electric motors are used while the front electric motor kicks in when needed for performance or traction.

The flagship models also get a 95kWh battery, set lower than the motors to reduce the centre of gravity and giving the e‑tron S and the e‑tron S Sportback WLTP-rated ranges of up to 223 miles and 226 miles respectively (preliminary values).

They also feature progressive steering and S-specific adaptive air suspension with the ability to vary the level of the body by up to 76 millimetres depending on circumstances and setting, while the brakes have been upgraded to six-piston calipers at the front. 21-inch wheels will be standard in the UK, with a 22-inch wheel available at a later date as an option.

Fleets and drivers placing orders before 31 December 2020 will receive a free 7kW wallbox charger for home installation alongside a free 12-month subscription to the e-tron Charging Service. This enables holders of the e-tron Charging Service RFID payment card to access facilities provided by 18 charging firms, and issues them with one simple monthly invoice for all transactions. Drivers will also get £150 worth of electricity for charging under the subscription.