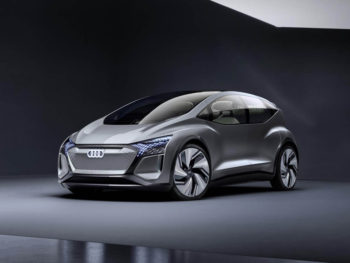 Audi has introduced a new mobility concept at Auto Shanghai 2019, designed for megacities of the future

The concept, shown at Auto Shanghai 2019, the AI:ME concept has a length of 4.30 metres – similar to an Audi A3 – yet the interior is made larger by a longer than usual wheelbase of 2.77 metres.

Although systems with level 4 do not require any assistance on the part of the driver, their function is limited to a specific area—such as motorways or a specially equipped area in inner cities. The driver needs to resume the task only when the car leaves the area defined for fully automated driving.

Audi says that the technology will enable the car to drive fully autonomously without any human input necessary, providing the supporting infrastructure is put in place. The idea is for traffic to be self-regulating and kept flowing to reduce congestion. “This is an important requirement for the occupants of the car to be able to detach themselves mentally from the traffic around them,” Audi adds.

An interesting side-note of autonomous cars is that headlights will no longer be necessary to illuminate the road ahead for the driver, with the cars instead using lighting for awareness to other road users, pedestrians and cyclists alike.

The electric car is powered by an 170hp motor, plenty powerful enough to propel the vehicle and its occupants between the speeds of 12.4 and 43.5mph, which Audi believes will be the predominant range for an urban mobility solution such as the AI:ME.

A 65kWh battery should be plenty of capacity to allow a range in excess of 150 miles, though Audi has not stated a theoretical maximum – instead the company points out that, “long mileage ranges are less relevant than the ability to make good use of the operating time” and “65kWh is sufficient for meeting these requirements”.

“Audi on demand” is available in metropolises on several continents and is already the perfect example of the future expansion of Audi’s offer into a global mobility service provider.